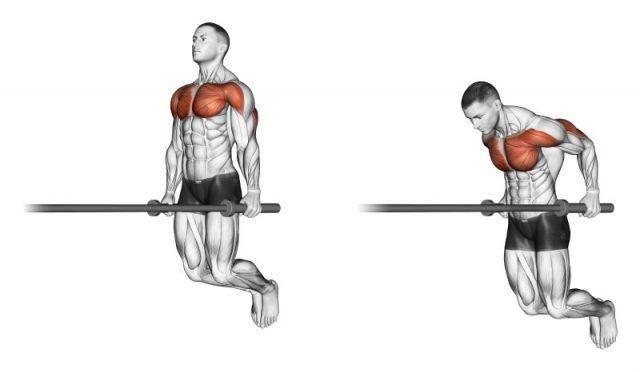 The starting position sees the athlete suspended thanks to the force exerted by the upper limbs on the parallels. The grip can be neutral or neutral / prone, and the distance between the hands can vary from even to greater than shoulder width. The arms are stretched and the body inclined forward according to the distance between the hands, so that these two variables are directly proportional. The execution consists of a controlled descent of the body until the shoulder is horizontally aligned with the elbow or slightly below it from a lateral view. This parameter is subject to variations based on individual mobility, based on the grip and the degree of internal rotation of the shoulders that you decide to keep during the execution of the execution. The movement is allowed by the simultaneous flexion of the elbows, hyperextension of the shoulders and adduction of the shoulder blades. If the action just described is done with the elbows pointing outwards, or rather with the shoulders internally rotated, they also undergo abduction. At this point, the athlete pushes himself into the starting position avoiding bouncing. In this phase the elbows extend, the shoulders flex and adduce if they have been left free to abduct during the descent, and the shoulder blades roll downward as they are abducted.