Dip Machine | How Do You Perform Stretches Or Dips On The Machine?

By healthiergang writer , graduated in Medicine and Surgery.

Dip, also known as stretching or bending, represent, with all their variants, a category of free body exercises very useful for stimulating the upper part of the body, especially the pectoral muscles (clavicular and sternocostal head), anterior deltoid and brachial triceps (medial and lateral head).

It is possible to consider this as a basic multiarticular exercise, in which, in addition to the aforementioned, there are many muscles that are stressed: pectoral minor, dorsal major, teres major, rhomboid, large dentate, coracobrachialis and anconeus; it thus becomes clear how it requires a great muscular and joint synergy and how it can play a fundamental role in the development of strength.

Although very commonly the dips are performed at parallels, using your body as overweight, it is also possible to practice them on specific machines such as the dip machine or the easy power station, which it would obviously be advisable for less experienced athletes, who are approaching this exercise for the first time, since the execution of this requires great strength, coordination, concentration and joint mobility.

The easy power station is a machine very similar to the traditional dip station, but in which there is a platform with an adjustable thrust force thanks to counterweights, which allows the athlete, if he is unable to perform the exercise independently, to make the ascent phase easier by completing the range completely of movement. To this end, as is well known, easy power works in the opposite way compared to other machines: the less weight you use, the heavier the exercise will be.

Some models impose an upright position, others kneeling (the practice of bending the legs, when the dips are performed at the parallels, facilitates any help from the spotter); however this does not matter, what is important is that machine dips offer the same advantages as those performed on parallel bars without any assistance.

Dips, like pullovers and pull-ups, have the ability to recruit many secondary muscles at different intensities.i that will act as stabilizers: this has led some authors to define them as the "squat for the upper body".

The muscles most involved, however, remain the pectoralis major and the triceps.

Some bodybuilders consider it as one of the best exercises for i triceps, others for the pectoralis major, even going so far as to indicate it as a possible substitute for the flat bench, since the motor pattern of the dips traces in a certain way that of the declined bench presses, a statement that appears supported by various biomechanical studies who compared the dip to an "extreme declined bench". 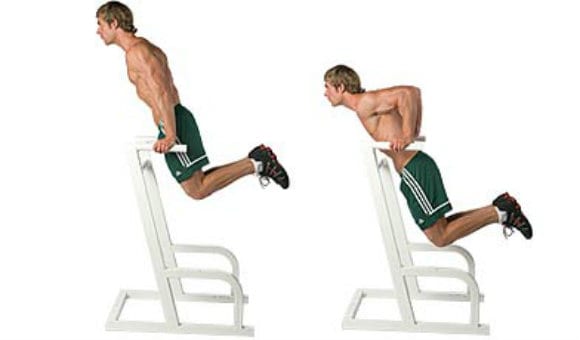 But which of the two muscles is most stressed? The secret lies in modifying the inclination of the torso and the trajectory of the arm: if the dips are practiced with the elbows wide and the torso tilted, they can be considered in all respects an exercise to get the pecs to work, with tight elbows and straight torso are best suited for the triceps.

Despite this, the pectoralis major intervenes in any case in the concentric phase being a flexor muscle of the arm, so it is not excluded in any case. The same is true for the triceps which are involved in elbow extension movements.

The dips, however, have been demonized by claiming that they destroy the elbow and shoulder joints.


Indeed they they are not recommended for those with anterior shoulder instability o pain in the elbows; however, this does not mean that we must carefully avoid them, especially if we are athletes in good health; rather we will be careful not to perform them with too tight elbows, since we would force the shoulder joint to a position of maximum external rotation, or not to use a too wide range of motion, which could contribute to the onset of subacromial impingement, a particularly troublesome tendinopathy, and to excessive stretching of the pectorals that could result in a tear.

But how are dips performed?

This is undoubtedly a demanding exercise for which you must necessarily pay the right attention to avoid making mistakes that could favor the onset of injuries. The most common mistakes among athletes who practice dips are:


However, there are many variations of this exercise but for each of them the muscles mainly affected always remain the same. 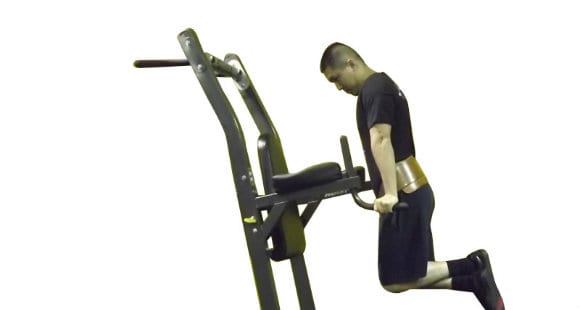 The numerous biomechanics studies conducted to date have provided conflicting results, so we refer to the experience of the trainer and the feelings of the athlete to choose the most suitable variant to meet the different personal needs.

The first rule to follow, however, is always that of "not getting hurt", so based on my experience I recommend that you always maintain a range of motion and an inclination of the body that respect the physiology of the shoulder-blade and elbow joints.

Audio Video Dip Machine | How Do You Perform Stretches Or Dips On The Machine?
Incline Bench Press | How are they performed? ❯

add a comment of Dip Machine | How Do You Perform Stretches Or Dips On The Machine?