Diet in the Post-Heart Attack

Importance of the Diet

After having suffered a heart attack, respecting some simple dietary rules becomes of fundamental importance to recover better and avoid further straining a heart already tried by the disease. 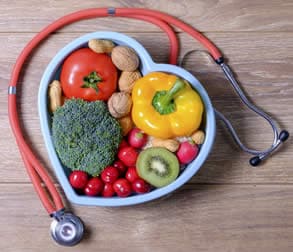 A correct diet, in fact, decreases the risk of suffering a new heart attack and helps to control blood pressure and body weight.
It is therefore important to strictly follow what is prescribed by the doctor in terms of choice of foods and their preparation.
Below we report, for indicative purposes only, some simple tips on diet in the post-heart attack, reiterating that they must not in any way overlap or replace what is prescribed by the doctor.

The basic principles of the post heart attack diet are:

Let's see in more detail how to respect these principles.

Why split calories into large, small, and frequent meals?

A too abundant meal greatly increases the work of the heart, both for purely mechanical factors, given by the expansion of the stomach, and for the lower blood supply to the myocardium (the blood flow is concentrated at the level of the digestive organs).
After suffering a heart attack it is therefore important to eat small and frequent meals, starting with a healthy breakfast and avoiding binges (even the occasional ones).
Furthermore, the greater distribution of meals, associated with a correct choice of foods and portions, favors the achievement or maintenance of an adequate weight.

Weight is a very important factor. It is crucial both in prevention and in post-heart attack therapy.
In fact, excess weight (understood as adipose excess) is the consequence of an incorrect diet and a sedentary and unhealthy lifestyle, and predisposes to the onset of metabolic diseases such as hypertension, hypercholesterolemia, type 2 diabetes mellitus, hypertriglyceridemia, hyperuricemia and gout etc.
Maintaining or reaching a normal weight reduces many risk factors that predispose to heart attack or worsen the condition after a heart attack.
The best way to achieve this goal is the association between diet and PRACTICAL physical activity (not all post-heart attack patients can play any type of sport).

The caloric intake of the post-heart attack diet must be calibrated in order to maintain, reach or at least approach the ideal weight.
In fact, when necessary, weight loss significantly reduces some of the most important risk factors for heart attack.
However, let us remember that people returning from a heart attack must not be subjected to excessive or subjectively intolerable stress; therefore, last-minute diets, extreme diets and all trendy nutritional regimes should be banned, favoring clinical nutrition instead.
In general we could define that it is necessary:

We reiterate once again that, normally, reaching the ideal weight is accompanied by a decrease in blood pressure and lipemia, and improves the control of type II diabetes and atherosclerosis (important risk factors for heart attack).

Decreasing sodium in the diet: how important is it?

Reducing sodium intake is essential for controlling salt and water retention and blood pressure.
This result is obtained on the one hand by abolishing or severely limiting the use of table salt (called discretionary salt) and on the other by reducing the consumption of the wide range of foods rich in sodium (for addition in the processing phases or in the recipe).
It is eventually possible to use the low sodium salt instead of the traditional one, but only and exclusively on medical indication, as it could negatively interact with certain drugs.

The use of low-sodium salt has a nutritional significance only if it is used in the same (or lower) quantity of traditional salt.

On the other hand, since the low-salt salt "salts less" (due to the lower sodium content), most people tend to use more of it, defeating its nutritional significance.

Useful tips to reduce sodium intake with the diet

Limiting the sodium intake with food is all in all easy, just take a few simple precautions:

The contribution of sodium present in the water we drink is practically nil, given that in a liter of common water with low mineral content we find only 5-15 mg.
In general, the diet of a patient who has had a heart attack should not provide more than 2 grams (2.000 mg) of sodium per day, or even less when blood pressure is particularly high.

Notes: the sodium content of processed foods varies according to the production methods used; for this reason we recommend getting used to checking the label of various food products before buying them.


Low-sodium diet: is it crucial for everyone?
In the post heart attack diet, the low-sodium diet is considered a very useful nutritional feature.
The sodium naturally contained in "raw" foods is sufficient to compensate for the body's demands (except for athletes who sweat a lot) and everything added or present in processed foods is to be considered "too much".
However, it must be admitted that the salt-free diet is on average poorly tolerated and, especially when it also assumes a slimming role (few calories), it has a very high percentage of renunciation.
We have already seen that the low-sodium diet in the post heart attack assumes a preventive-curative role against salt and water retention and arterial hypertension. On the other hand, sensitivity to sodium and the consequent predisposition to arterial hypertension is subjective. In fact, there are forms of hypertension, called sodium-sensitive, in which the excess of this mineral is highly harmful, and others that suffer less negatively this effect. Often, in the latter cases, it is of greater importance to preserve the physiological weight by treating or preventing overweight.
In conclusion, the low-sodium diet is a nutritional factor that "may" be necessary for post heart attack therapy but, especially in the case of overweight and weight loss difficulties, it is necessary to carefully evaluate its impact on the pleasantness of the diet.
If it proves excessively unpleasant, it may be advisable to settle for a partial decrease in overall sodium, preferring instead the slimming aspect of the therapy.

Sodium content of some foods (expressed in mg / 100 g)

Beyond the important nutritional recommendations listed so far, the post-heart attack diet should broadly follow that recommended for healthy people.

"Consume a rainbow of foods" is a metaphorical expression that emphasizes the importance of consuming a wide variety of colorful natural foods, rich in vitamins and antioxidants.
These substances are contained in fruit and vegetables, to which they give typical colors: anthocyanins in berries, lycopene in tomatoes, carotenoids in carrots, chlorophyll in green leafy vegetables etc. (see color diet).
If possible, it is advisable to prefer seasonal fruit and vegetables.
A diet rich in these foods provides numerous functional substances (phytocomplexes including phytosterols), which act harmoniously in regulating biological functions and eliminate any need to resort to various supplements.
Your country's guidelines for healthy eating recommend consuming at least 5 servings a day of vegetables, where each of these is represented, for example, by a medium-sized fruit (similar in size to a tennis ball), a cup (240ml) of fruit salad or 120ml of 100% fruit juice.

Fiber and glycemic index in the post heart attack diet

It is important to consume foods rich in fiber and to limit sugars with a high glycemic index (also called refined carbohydrates).
The best sources of fiber are fresh fruits and vegetables, whole grains and legumes.
Purified foods or foods rich in refined sugars - such as industrial fruit juices, carbonated sweet drinks, white bread and pasta - are instead low in fiber and rich in high glycemic index carbohydrates; for this reason, they should be limited in both primary and secondary prevention of myocardial infarction.

Potassium and magnesium in the post heart attack diet

Potassium and magnesium are two minerals that have a positive action on hypertension and act as alkalizers.
They favor the urinary excretion of sodium and are very important in the treatment of sodium sensitive forms.
Potassium is abundant in most foods, although the VI and VII fundamental food groups (fresh fruits and vegetables) are considered the most important nutritional source.
Magnesium is less abundant in the diet and the most important nutritional sources are whole grains and legumes (III and IV fundamental food group); this mineral is not lacking in fruit, vegetables and oil seeds.


Other articles on 'Diet and Heart Attack'

add a comment of Diet in the Post-Heart Attack