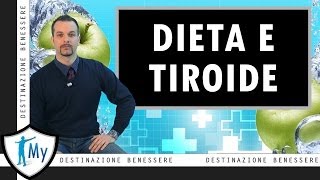 Today we will talk about the importance of the DIET in the correct functioning of the THYROID gland.

Before starting this brief study, it is good to remember the most important information concerning the THYROID.

The thyroid is a GLAND that produces three hormones: T3, T4 and CALCITONIN. These are necessary for various functions, such as the GROWTH OF THE SKELETON and the BRAIN, the REGULATION of the BASAL METABOLISM, the DEVELOPMENT of the SKIN, the PILIFEROUS and the GENITAL APPARATUS.

However, in principle, when it comes to DIET and THYROID, the topic of greatest interest is always the INCREASE of T3 and T4 secretion. In fact, the increase of these two hormones in circulation, as they are responsible for controlling the basal metabolism, is correlated with a greater ease in body weight loss.

But is it really possible to increase T3 and T4 with diet?

The thyroid secretes its hormones on the basis of a complex mechanism of FEED-BACK (positive or negative) that affect various molecules circulating in the blood. Specifically, the release of T3 and T4 is enhanced above all by the TSH hormone and by the SIGNIFICANT presence of some nutrients taken with the DIET.

All this is linked to the CHEMICAL COMPOSITION of the hormones themselves, which are synthesized in the gland using the amino acid THYROSINE and the mineral salt IODINE.

While the DIET increase in THYROSINE does not seem to affect the production of T3 and T4 much, by increasing the IODINE in the diet it is possible to obtain a much more RELEVANT reaction! Obviously, the result varies according to the subjectivity, the pre-existing diet and the amount of increase of the mineral salt.

First of all, we specify that iodine is one of the very few DIFFICULT nutrients to be supplied even through a balanced diet. For example, for a HEALTHY adult, a need of about 150µg / day is estimated, while from the statistical surveys published on the LARN it seems that on the WHOLE national territory (and beyond) the iodine intake is on average LOWER than necessary. Iodine is mainly contained in fishery products and sea algae, while only a minor part in vegetables grown in soils rich in this mineral. Therefore, those who do not consume the aforementioned foods FREQUENTLY, should make use of the use of IODIZED SALT, in order to reach the respective daily requirement and avoid the deficiency that seems to be related to hypothyroidism and the formation of GOZZO.

Being on average deficient, it is reasonable to think that the increase in iodine in the collective diet can benefit the production of T3 and T4 by the thyroid. However, you also MUST understand HOW MUCH iodine you need to supplement! Generally, the use of iodized salt is more than enough, but there are also FOOD SUPPLEMENTS based on this mineral. In principle, between intake with diet and integration, it is advisable NOT to exceed 500-600µg / day to AVOID the risk of TOXICITY, in turn related to HYPERthyroidism and NODULAR TOXIC GOZZO.

Finally, remember that the thyroid gland BRIGHTS iodine deficiency for short periods BUT, in case of pregnancy (when the need is higher), a deficiency of the mineral can cause even very serious fetal compromises.

Another very important mineral salt for the balance of the hormones secreted by the thyroid is SELENIUM. Compared to iodine, which is necessary for the synthesis of T3 and T4, selenium is ESSENTIAL to the conversion of the NOT active form (T4) into the ACTIVE form (T3). Indeed, what many do not know is that, EVEN if the release of T4 prevails over that of T3 (in a 4: 1 ratio), T4 must subsequently be converted by an enzyme into T3. Ultimately, without selenium it is not possible to synthesize that specific enzyme at the expense of the levels of T3 circulating in the blood.

All this is confirmed by some clinical studies that have correlated iodine and selenium deficiency BOTH with the onset of hypothyroidism, BOTH with the increased risk of AUTOIMMUNE THYROIDITES (perhaps the latter ALSO due to the lack of the known antioxidant property of selenium) .

The average selenium requirement for a healthy adult organism is about 55 µg / day, while the toxicity threshold is considered to be over 450 µg / day. Like IODINE, it is a trace element contained mainly in fishery products, and its excess can ONLY manifest itself with the abuse of food supplements.

In nature, there are some active ingredients capable of optimizing (but NOT increasing beyond NORMAL levels) the secretion of T3 and T4. They are suggested in the field of slimming, when it is "hypothesized" that the levels of thyroid secretion may drop compared to the norm. In reality this happens ONLY in case of prolonged FAST, but these are still noteworthy products.

FRORSKOLINA is obtained from an oriental plant called Coleus forskohlii. It has several metabolic functions and its effectiveness in slimming consists in normalizing the release of the hormones T3 and T4 WITHOUT affecting the natural thyroid efficiency. FORSKOLINA supplements must be taken in variable quantities based on the specific formulation, and in any case NEVER over 240mg of active ingredient per day. It is always advisable NOT to extend the treatment beyond 90 days and it is recommended to suspend it in case of: allergic manifestations, aggravation of low blood pressure and stomach hyperacidity.

GUGGULSTERONES, on the other hand, are plant sterols extracted from the resin of Commiphora mukul. They too have multiple functions but, as far as thyroid hormones are concerned, they have an effect "similar" to the physiological one of SELENIUM. The intake of these sterols should therefore promote the increase in the ratio between T3 and T4, with a consequent increase in the most active molecule. Once again the dosages vary according to the CONCENTRATION of the active ingredient and the FORM of intake, and the possible side effects are: headache, nausea, diarrhea, belching, hiccups and abdominal bloating.

If the intake of FORSKOLINA and / or GUGGULSTERONI should overlap with pharmacological therapies of various kinds, it is ABSOLUTELY NECESSARY to consult your doctor to AVOID unwanted drug interactions.

Perhaps many listeners do not know that there are also foods that can have a negative effect on iodine metabolism and therefore HARMFUL on the health of the thyroid gland.

These are foods containing molecules obtained from the hydrolysis of GLUCOSINOLATES, namely: THIOCYANATES, ISOTHIOCYANATES and GOITRINES. These components are present in abundance in plant foods belonging to the CRUCIFERE family, such as rapeseed, cabbage, turnips, watercress, rocket, radish and horseradish, as well as in spinach, soy, millet, tapioca and lettuce; furthermore, we REMEMBER that the milk of animals that feed on these vegetables may contain traces of these active ingredients.

On the other hand, the molecules deriving from the hydrolysis of GLUCOSINOLATES are THERMOLABLE and this means that to avoid any effect on iodine metabolism it is sufficient to cook them. Ultimately, such foods should NOT be a cause for concern, except for their consumption raw and in CORRESPONDENCE with significant dietary iodine deficiencies or hereditary enzymatic deficiencies.

Also in the group of food additives there are some molecules that interact negatively in the metabolism of iodine; this is the case of NITRATES, which hinder the absorption of the mineral by the thyroid.

The production of T3 and T4 is also influenced by the nutrition status of the organism. It is well known that, by eating often, you are guaranteed to OPTIMIZE the nutritional intake of meals and to MAINTAIN a good basal metabolism. For this reason, many are led to believe that, by consuming FEW MEALS, the metabolism tends to lower due to the reduction of thyroid activity. In reality it is a beautiful and good conceptual DISTORTION! The thyroid hormone production CAN be affected by the calorie deficit ONLY in case of prolonged FAST. Spending half a day WITHOUT taking food, however wrong it may be, does NOT lead to a lowering of the basal metabolic rate. Then, obviously, during a prolonged fast (such as 24 or 48 hours) a more or less important variation in thyroid hormonal flows certainly takes place. Ultimately, when it comes to the thyroid, skipping a meal or two is certainly not the end of the world!

We then make a final clarification on the interaction between sporting activity and the production of T3 and T4. Thyroid hormones are not particularly subject to alterations induced by motor activity, EVEN if intense and prolonged. However, what can happen is an increase in the CATABOLISM of these molecules and a consequent LESS permanence in the circulation. On the other hand, this determines a greater PHYSIOLOGICAL activity of the thyroid to compensate for this increase in molecular turnover.

Ultimately, as regards the DIET-THYROID interaction, the correct secretion of hormones T3 and T4 is guaranteed ESPECIALLY by the dietary intake of IODINE, while SELENIUM allows the conversion of T4 into T3. Low concentrations of these minerals in the diet are to be considered potentially harmful to thyroid health, as well as a tendency to undermine the secretion of T3 and T4.

Furthermore, it is always good to avoid fasting, especially if it is prolonged, while in the case of low-calorie weight loss therapy, the supplementary integration of forskolin and guggulsterones can help. We also remind you that in case of: CONCLUDED hypothyroidism, chronic iodine deficiency and specific hereditary enzymatic alterations, it is good to avoid the intake of goitrogen foods UNLESS in well-cooked form.