Diet and Nails - Foods to Strengthen Them

Unlike animal claws and hooves - which have an offensive / defensive, protective and grip-increasing function - the laminar nails of primates are mainly used to: 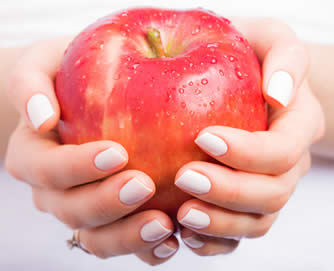 Ultimately, the nails constitute a specialization of the epidermis and are mainly composed of dead cells (corneocytes). These cells, very rich in keratin (protein fiber also structured by minerals and vitamins) are responsible for the chemical-physical properties of the nails.

Despite the hardness and flexibility that characterize them, nails are also subject to complications of various kinds.
The most common is frailty (often associated with thinning), due to nutritional deficiencies, chemical-physical stress, trauma, infections, dermatological problems and systemic diseases.
Whatever the cause of nail fragility, it is always a good idea to check that the diet is able to compensate for all nutritional requirements.

As anticipated, the nails are made up of dead corneocytes filled with keratin.
The latter is a peptide fiber composed largely of sulfur amino acids. However, the synthesis and integrity of protein chains are also guaranteed by the presence of vitamins and some trace elements.
In particular, the resistance and strength of the nails are ensured by:

The "diet for nails"must guarantee the supply of all the nutrients we mentioned above. More in detail:

NB: Most of the vitamins are contained in the animal liver.

- nail supplements to be taken by mouth, as well as the diet, do not exert a highly specific action.
They can be of great help in case of specific or generalized nutritional deficiencies, and generally exert their function on all keratinized tissues (skin, hair, nails and hair); their relevance is visible with a reduction in fragility and an increase in the health of nails, hair, skin and mucous membranes.
Oral nail supplements contain all the nutritional principles we talked about in the previous paragraph, single or in combined form.
To counteract the fragility of the nails, local or topical supplements are also available to be applied directly to the nail plate. They mainly contain water, cystine, lipids and some additives.

add a comment of Diet and Nails - Foods to Strengthen Them