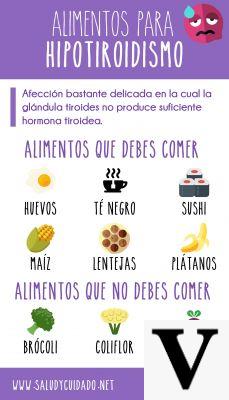 Is There a Diet Against Hypothyroidism?

The pivotal role of iodine in promoting proper thyroid function, and the widespread prevalence of the disorder, make many people with hypothyroidism wonder if there is an effective diet to treat this condition.

For its part, official medicine replies that there is no standard diet against hypothyroidism, first of all due to the different origins of this disorder characterized by an insufficient synthesis of thyroid hormones.

Worldwide, severe dietary deficiencies in iodine are one of the most common root causes of hypothyroidism; on the other hand, we must not forget that even an excessive intake of the mineral can - in the long run - subvert normal thyroid function, creating hyper but also hypothyroidism.

Equally often, hypothyroidism has an autoimmune origin, because it is linked to alterations of the immune system (see Hashimoto's thyroiditis); more rarely, however, the thyroid does not function due to ineffective hypothalamic stimulation, or due to its congenital absence.

Iodine supplements: are they good for you?

For what has been said so far, although the use of iodine-rich supplements is particularly useful in cases of reduced dietary intake, when hypothyroidism does NOT have a dietary origin, it is good to avoid any specific supplementation, since an excess of iodine could even precipitate the condition. In other cases, these products would be completely irrelevant, turning into a useless waste of money.

For this reason, when it comes to diet and hypothyroidism it is necessary to avoid generalizing:

since the disorder recognizes different causes of origin, the response to oral iodine supplementation may be different.

Under medical supervision, this practice can be of some use only in those cases in which hypothyroidism is supported by dietary deficiencies, now rarer than in the past due to the widespread practice of adding iodine to common salt. The mineral intake can also be increased through a simple diet, simply by choosing foods rich in iodine, such as sea fish, seaweed, shellfish and whole sea salt.


However, a specific supplementation offers the advantage of being standardized in doses, a very difficult goal to achieve with the common diet.

There are also particular foods (such as cabbage, broccoli, cauliflower, soy, flax seeds, turnips, radishes, millet and tapioca) which - especially if eaten raw - significantly increase the need for iodine, disturbing the metabolism. Such foods, sayings gozzigeni, should therefore be consumed in moderation, but only in the case of iodine deficiency hypothyroidism.

Among the most used supplements to stimulate thyroid function in healthy subjects are i guggulsteroni and forskolina.
Unofficial medicine also recommends coconut oil, because it appears to be able to stimulate the function of the thyroid gland and support metabolism.

In any case, all these products certainly cannot replace the efficacy of hormone replacement therapy for subjects suffering from hypothyroidism.

For some years we have known that in addition to iodine deficiency, also other environmental factors, in particular the selenium deficiency, can contribute to the onset of hypothyroidism.


While iodine is the fundamental element for the synthesis of the thyroid hormones, triiodothyronine (T3) and thyroxine (T4), selenium plays a fundamental role in their metabolism.

Grains, meat and fish are important sources of selenium.

The fact that mainstream medicine gives little importance to diet in the treatment of hypothyroidism also derives from the fact that this disorder can be easily controlled through a replacement therapy based on levothyroxine, possibly accompanied by triodothyronine. In practice, the thyroid hormones, which are deficient in all cases of hypothyroidism, are taken with a simple tablet of medicine.

Effective, safe and in therapy for many years, levothyroxine must be taken according to medical indications; generally, it is recommended to take it on an empty stomach, at least 4-5 hours after taking iron or calcium supplements, as well as the multivitamins that contain them. The same goes for antacids based on aluminum or magnesium salts, and for foods such as soy flour, nuts, and various drugs (cholestyramine, colestipol, sucralfate).

In general, excess fiber can also reduce intestinal absorption of synthetic thyroid hormones; however, the foods that are rich in it are very important to avoid constipation problems, quite common in people suffering from hypothyroidism. Fruit and vegetables, therefore, should be consumed at a sufficient distance from taking the medicine, without depriving oneself in any way of their precious nutritional supply.


The role of diet in the treatment of hypothyroidism is therefore aimed, at least according to official medicine, above all to avoid possible interactions with the medicines taken; in this sense, we refer to a careful reading of the package insert and medical advice, dissuading readers from the idea of ​​unconsciously changing their diet on the basis of what they have learned on the internet, especially on sites that - unlike this one - prefer to embrace the theses of unofficial medicine.