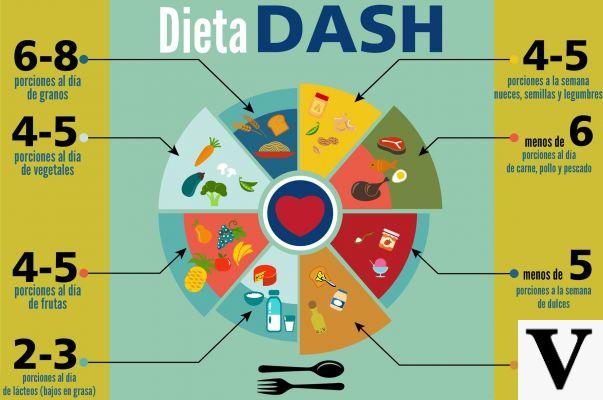 Diet plays an important role in the treatment of hypertension, which in many cases becomes even therapeutic; for this reason it must be a matter of medical competence, to which the guidelines reported in this article are not intended in any way to replace.

Salt and Other Risk Factors

When it comes to diet and hypertension, the emphasis inevitably falls on table salt and on foods that contain it in significant quantities. To tell the truth, the correlation between diet rich in sodium and hypertension has never been conclusively demonstrated; however, we know that the incidence of the disease is lower in populations that adopt a low-sodium diet. Therefore, a diet rich in sodium increases the risk, therefore the probability, of developing hypertension, but it is not certain that those who blatantly break this rule will suffer from hypertension and those who respect it will be exempt.

The role of sodium is in fact blurred by many other predisposing factors, such as eating habits in a broader sense (calorie and lipid excesses favor the onset of the disease), genetic predisposition, sedentary lifestyle and lifestyle (stress, smoking, alcohol or drug abuse etc.).

Both in the preventive and in the therapeutic field, the diet for hypertension is divided into four fundamental points:


The sodium intake will be reduced to below 3-5 grams per day, thanks to the reduction of salt consumption (or its replacement with low sodium analogues) and foods rich in sodium. In various studies, the transition from the typical diet of industrialized countries (which provides ten or more grams of sodium per day) to a low-sodium diet has been shown to reduce blood pressure by 2-8 mmHg. In this regard it is good to remember that one gram of normal table salt contains 400 mg of sodium; consequently, a pinch of salt brings about one gram of sodium, while a teaspoon brings 5, a spoon 15 and a handful 30.

How to reduce the consumption of salt

Restricting the addition of salt to foods may seem difficult, but in reality, there is nothing simpler; the palate, in fact, can be educated, and if the reduction occurs gradually, it will get used to the new diet without too many problems, finding tasty dishes that until recently seemed insipid; salt can also be replaced with low-sodium products (containing for example potassium chloride) or various aromas and spices, such as chilli, herbs, garlic, parsley, rosemary, sage and oregano. In this sense, parents have a great responsibility towards their children, who must be directed, from the earliest years of life, to a diet lacking in snacks and appetizers rich in salt.


Once the sodium addition has been reduced, it is also necessary to reduce the consumption of foods in which it is present in large quantities; packaged food and cured meats, for example, are two of the main obstacles to reducing sodium in the diet. Moreover, these are generally high-calorie foods, which increase the stimulus of thirst, often quenched with sugary or alcoholic drinks. Also pay attention to stock cubes and preparations to flavor dishes - widely used in restaurants, especially in oriental ones - because they are rich in monosodium glutamate.

The daily sodium requirement is about 400 mg, a much lower value than the amount taken by many people (even 20 times higher), which increases in febrile episodes, in case of profuse sweating (including that induced by physical activity), excessive vomiting and diarrhea.

In general, sodium is abundant in animal foods (especially if aged, such as cheeses and cured meats) and is scarce in vegetable ones, which are instead richer in potassium (artichokes, beets, celery, carrots, turnips, spinach and cabbage contain more sodium than other commonly used vegetables). Of course, sodium is also abundant in foods preserved in salt or brine, such as capers, some fish and olives.

As anticipated, the reduction in sodium consumption must be accompanied by an increased intake of potassium; this mineral can in fact be considered a real antidote to sodium, so much so that the adequacy of its intake guarantees better blood pressure control and, in some cases, reduces the need to resort to antihypertensive drugs (hence the importance, if already suffer from hypertension, consult your doctor before changing your dietary habits).

Potassium is found mostly in whole grains, fruit and vegetables.

The dietary treatment of hypertension must therefore not focus solely on reducing sodium consumption, but rebalancing its relationship with potassium and limiting excesses, especially as regards the consumption of lipids, alcohol and high-calorie foods.

The preventive - therapeutic - behavioral framework is completed by adequate aerobic physical activity, to be carried out at a not too demanding pace on at least three weekly occasions, lasting 40 minutes or more.

The simple dietary rules reported in this article are combined with the recommendations of the so-called DASH diet (acronym for Dietary approaches to stop hypertension), developed in the United States to counter the spread of the disease and recommended by many doctors and nutritionists.

Other articles on 'Diet and Hypertension, DASH Diet'

add a comment of Diet and hypertension, DASH diet