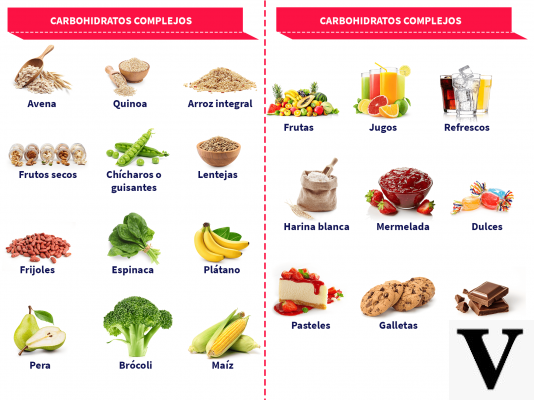 They are good, they are bad, they make you fat ... carbohydrates are always the center of indictment.
But are they really responsible for the fat gain?

It must be said that their bad reputation is given by the fact that they have a close relationship with insulin ("fattening hormone").
In fact, carbohydrates are assigned a glycemic index (GI) which represents the speed with which they reach the bloodstream and cause an insulin response.
The latter has the task of storing the nutrients drawn from the ingested food.
As long as this hormone is kept in the low - medium range, it does not cause any lipid problems.
When it is high, it activates liposynthesis (making new fat molecules) and increases the volume of adipocytes (fat cells) making them larger.
Hence, the higher the insulin levels, the more fat we will store.

It should also be noted that chronic conditions of hyperinsulinemia (excess insulin) also represent an important risk factor for the development of type 2 diabetes.

Importance of the Glycemic Index and Load

Insulin levels rise dramatically following a meal rich in carbohydrates, especially if they have a high glycemic index.


The absolute quantity of carbohydrates ingested and their quality determines the glycemic load of the meal:

The higher the glycemic index of a meal, the faster the blood will enrich with glucose (the individual molecules that make up a carbohydrate) creating a hyperglycemic reaction.

The extent of this peak will also be clearly influenced by the amount of carbohydrates consumed (glycemic load).

A large increase in blood sugar will be mitigated by an equally abundant insulin production, which will "clean" the blood of sugars, storing them in the liver, muscle and fat cells. If the liver and muscle stores of sugars (in the form of glycogen) are saturated, much of these carbohydrates will be converted into reserve fatty acids.

In addition, the abundant production of insulin causes reactive hypoglycemia accompanied by weakness, fatigue and the stimulation of hunger.
This process is called by some "hell of carbohydrates"or" the vicious cycle of insulin ".

The Vicious Circle of Insulin

To better understand, let's take as an example the ingestion of a slice of cake and see, through a diagram, what it entails:


Which Carbohydrates to Choose?

Ultimately, carbohydrates cause "problems" if they have a high glycemic index and if they are consumed in industrial quantities.
So we must not say that carbohydrates are the number one enemy of physical fitness, but it is their choice and their quantity that causes an increase in fat.
In fact, if we consume carbohydrates with medium - low glycemic index in adequate quantities, we maintain stable blood sugar levels; consequently we will not have insulin fluctuations and we will not gain weight.
Furthermore, a stable insulin level induces constant energy levels, which allow us to have adequate energy throughout the day without warning of weakness, fatigue and hunger.
Among the recommended foods are mainly vegetables and fruit. Even pasta, if taken in moderation and with certain precautions, does not bring an excessive insulin response.