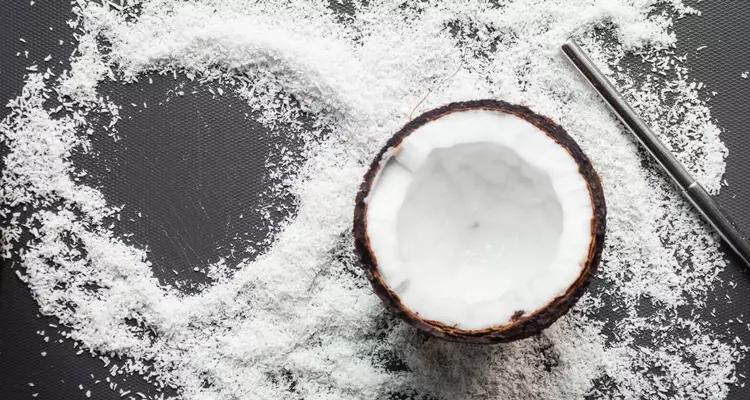 Il dehydrated coconut it is an ingredient rich in properties but which contains a lot of calories.

Let's see its nutritional characteristics and in which recipes to use it.

Properties and calories of dehydrated coconut

Full of selenium, manganese and copper, dehydrated coconut o dry coconut is an excellent food source, to be included in the daily diet.

In fact, it is a food with distinct characteristics antioxidant properties, which protect cells from free radicals and oxidative stress; it also helps the nervous system in its functioning.

Also rich in other minerals, such as calcium, potassium, phosphorus, iron and zinc, it is thanks to the presence of selenium that coconut becomes a valid ally for the thyroid.

There are also amino acids and vitamins, which however are found in greater quantities in fresh coconut; in dry coconut we find in fact above all vitamins of group B in modest quantities.

This is not a low calorie food: 100 grams of dehydrated coconut contain approx 440 calories; not for nothing, it is generally indicated in low-calorie diets only if it replaces other sources of fat, while it is excellent for enriching sports bars.

Here 2 recipes based on dehydrated coconut: an Indian soup, perfect for a romantic veg dinner, and a simple but effective dessert.

Lentil and coconut soup from India

Preparation: boil the lentils until al dente, then drain, put the oil on the heat with the chopped onion, the chopped fresh ginger, a teaspoon, the potato and the diced tomatoes. Then add 2 teaspoons of ground coriander, one of cumin, half of turmeric, chili to taste and a couple of large tablespoons of dehydrated coconut.

After having blown everything up for about 8/10 minutes, add the previously boiled lentils, half a liter or a little more of water, the cabbage in chunks and season with salt. The lentil soup will be ready when the lentils begin to flake. Season with fresh coriander to taste or a little coconut milk to decorate.

Preparation: whip the egg whites until stiff, then, separately, whip the sugar with the yolks, adding sifted flour with baking powder and all the other ingredients. Combine the two compounds and bake at 180 ° C for about 40 minutes.

Where to find dehydrated coconut

Dehydrated coconut is found both in very fine flakes and without peel, as if it were a flour, but also in larger cubes or flakes, with black skin. Depending on where it comes from and whether it is organic or not, it has various costs that range from 2 euros to 7 euros per bag.

add a comment of Dehydrated coconut: properties, calories and recipes