Deadlifts with a straight-legged barbell 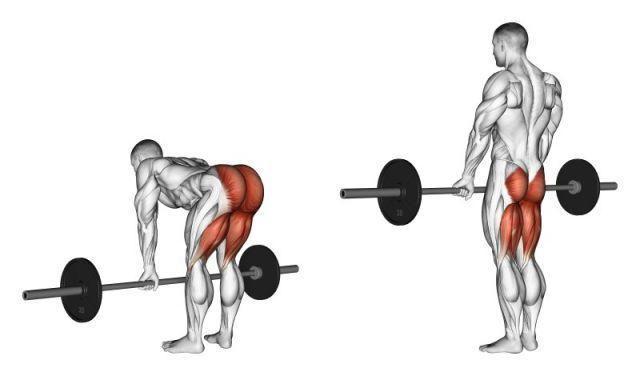 The starting position sees the athlete standing with the spine and hips flexed forward. The barbell is attached to the shins, resting on the ground at about 23 cm in height. The distance between the feet (stride) is very close to the distance between the shoulders. The opening angle of the feet is about 10 °, but with room for modification based on individual characteristics; generally between 8 and 20 degrees. The shoulders are located a few inches ahead of the bar from a lateral view. The outstretched arms immediately descend to the outside of the legs. The knees are fully extended or slightly less and consequently the tibia and fibula are perfectly vertical or almost. The hips and spine are flexed just enough to allow the athlete to reach the barbell with the abducted shoulder blades with his hands. The grip can be supine, prone or mixed (one hand supine and the other prone); the latter confers greater solidity. The shoulder blades are abducted. The execution consists in the simultaneous extension of the hips and spine. To lighten the load on the spine, during the movement of the barbell, it must be kept attached to the body thanks to an extension of the shoulder. Knees and ankles do not change their angle for the duration of the exercise. The final position sees the athlete with his back in his position of strength, the hips adducted and the knees with the same degree of flexion they had at the start.

add a comment of Deadlifts with a straight-legged barbell