Daikon, the root that purifies 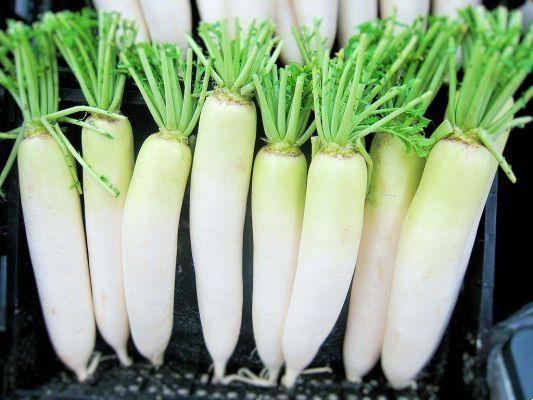 Il daikon, this white root of Chinese origin that we find more and more frequently in our supermarkets, is slowly entering our recipe books, but its property, especially those depurative.

A good combination of the vitamin C with those of group B make it an anti-inflammatory and sedative food; moreover it is an excellent source of many elements, among which we mention potassium, calcium, iron, copper and sulfur.

It is a vegetable rich in dietary fiber, of great help in cleansing of the intestinal tracts, And is low in fat.

The greatest purifying effects can be seen on the skin and on liver: in the first case by applying slices of daikon on the affected parts of the epidermis, in the second by drinking the juice daily.

Description of the daikon

Daikon is an underground vegetable, of which mainly the most developed part is consumed, namely the root, which, unlike other varieties of radish, has a less intense flavor and not at all spicy (so much so that it is sometimes called "white carrot" ).

It is the largest member of radish cultivars, typically 20-25 centimeters, although some types include the Sakurajima they can effortlessly reach 50 centimeters.


It has relatively small leaves, which are also edible like those of the other members of the Brassicaceae family.

Daikon is not a difficult plant to grow. Like all underground vegetables, which must develop the underground part of the plant, daikon requires a soil as soft and well worked as possible.

The ideal would be to have a raised surface, to be kept well moist afterwards sowing which takes place over the months between April and September: the seeds can be laid in place in furrows that are not too deep and not less than twenty centimeters away from each other.

Following germination, you can proceed by thinning out any plants that are too close to each other, choosing to keep the strongest and healthiest ones.

Nowadays it is easier and easier to find daikon seeds of biological origin, perhaps by having them sent over the internet. In the absence of a proper vegetable garden, it is possible to grow some daikon also in pots.

Read also The consumption of roots in the raw food diet >>

In the country daikon is used both cooked in soups and stews, be raw in salads e contours.

In kitchens of origin, such as the Japanese one, daikon is also used dried or as a condiment if left to macerate with lemon and soy sauce; its leaves are sometimes stewed, while i daikon sprouts they are perfect for salads.


In China we find fried daikon among infinite mixes of spices, or used as stuffing for rolls and other dishes similar to what we would call in the country savory pies.


In Korea, harder daikon varieties are preferred to boil in soups and broths. In Indonesia it is chopped together with the carrot, which counterbalances it spiciness, to garnish local squares.

In countries like Pakistan or Bangladesh it is common to find dishes made from daikon leaves, used as cabbage leaves along with various chilli and masala. It is therefore a very versatile vegetable, from which a juice not bad to add to those of fruit and vegetables.

The daikon is therefore a food supplement among the most effective for the safeguard of health and good functioning and the purification ofintestine and liver, but it is impossible not to mention even in passing some other functions that it performs on the human body: there are numerous studies on the positive action of taking daikon pulp in cases of diabetes mellitus.

Its ability to fight anemia is recognized; it is used successfully in case of weakness, general malaise, asthenia; turns out to be an ideal remedy for all cases of inflammation; finally, it also has antioxidant, hepatoprotective, anti-asthma, skin protective, antiviral and antimicrobial qualities.

> All the properties and benefits of daikon

> Daikon among the fat burning foods

> How to cook daikon

add a comment of Daikon, the root that purifies