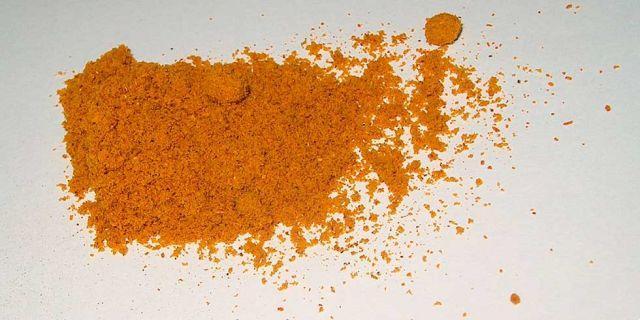 Curry is a mixture of spices used in the East, particularly in India.
Also known by the name of masala this spice blend traditionally includes: the cumin, coriander, chili pepper, il cardamom cinnamon turmeric, fenugreek, the cloves, black pepper and ginger.

If we look at 100 grams of curry powder we will find about 60% composed of carbohydrates, 30% of vegetable fats and 10% of proteins. In addition, curry has a high richness of vitamins such as A, D, E, K e those of group B.

Furthermore, there are many antioxidants in curry  which fight free radicals as well as active ingredients of different herbs such as capsaicin, curcumin and various essential oils.
Each of the spices present in the curry blend brings specific nutritional and healing properties to our body.

La mixture of spices that make up the curry therefore it has many beneficial effects on the body and in particular this mixture has the ability to counteract the risk of tumor formations. For example, turmeric with its active ingredient curcumin is able to inhibit the formation of cancer cells and also manages to stop the synthesis of substances that cause inflammation in the body. Positive effects have been correlated for fighting cancer cells in breast cancers, underdone, to the skin and prostate.

It also has antineoplastic properties and prevention of degenerative diseases such as Parkinson multiple sclerosis and Alzheimer.

Curry also has an anti-inflammatory action with dilatation capacity on the blood system which affects in particular the vessels thus managing to balance cholesterol and the glycemic index. Curry thus becomes an aid against bad cholesterol by activating its anti-cholesterol properties and also manages to regulate the glycemic index with positive effects for those suffering from diabetes. The effects on the stimulation of blood circulation they are given in particular by pepper which also manages to fight water retention and with it also the imperfections of cellulite.

The cumin present in curry contains essential oils capable of counteracting the problems of meteorism and abdominal swellingand solving these intestinal ailments. It promotes the digestive process, stimulating glandular secretion and counteracting the symptoms of nausea and vomiting.

Curry also appears to be capable of stimulating the gastric mucosa counteracting abdominal discomfort and pain as well as having stomatal properties given by cumin, cardamom and ginger that are able to relieve heartburn, spasms, contractions and swelling in the gastrointestinal tract.

Curry is a good pain reliever thanks to the presence of capsicin contained in chilli and in some mixtures, nutmeg is also used, which is also rich in the same active ingredient.


Finally, curry has slimming properties thanks to the effects of these spices that manage to regulate metabolism and help burn fat. In particular, cinnamon works by slowing down the sense of hunger while chilli and ginger help to increase the speed with which calories are used. Curry is thus used in low-calorie diets.

Read also How curry is made >>

This spice blend may be too strong for some individuals who have particular health problems. For example, the chili pepper could be the cause of the formation of irritation especially in the urinary tract and this due to its intrinsic capacity as a "heating fire element".

Pepper is also not suitable for people suffering from gastrointestinal problems such as gastritis and ulcers. People who are subject to the formation of gallstones must avoid the use of cucuma because it has properties that stimulate the secretions of bile acids and therefore would aggravate this disorder.

On the other hand, no problem with the use of curry during pregnancy and instead during breastfeeding we will have to evaluate if the baby appreciates the taste of milk. In fact, the spicy substance called capsicin which is present in pepper and chilli passes into breast milk releasing the well-known sensation of spiciness. THEn the country it is not recommended for use during breastfeeding and for small children because children's digestive systems may not be ready for such spices.

On the other side of the world, however, in eastern countries such as India the use of curry it is so rooted in tradition that breastfeeding mothers get their babies used to recognizing the typical taste of food cooked in their country of origin and this without any negative effect for the children.