Cupuaçu: properties, benefits, how to eat

Il cupuacu, a fruit native to the Amazon rainforest, contains theatrine, a powerful one antioxidant, anti-inflammatory and analgesic. Let's find out better.

> How to eat cupuaçu

As the scientific name Theobroma grandifolium reveals, cupuaçu is one close relative of cocoa (Theobroma cacao) both typical species of the Amazon forest belonging to the genus of Sterculiaceae.

The cupuaçu trees are quite tall, about twenty meters, covered with dark leaves that even reach 30 centimeters. It produces oblong, brown fruits, about 20 centimeters large and weighing up to two kilograms. Inside the hard and woody exocarp (a real shell) is the white and creamy pulp.

The fruit is praised as one of the tastiest tropical fruits in general and specifically Amazonian: the pleasantly creamy pulp has a unique flavor of its kind, which can vaguely recall that of pineapple, banana and cocoa. Given its organoleptic quality and its numerous phytotherapeutic properties, it is universally recognized as one of the "superfruits".

Liver, skin, hair digestion. Excellent ally for those who intend to lose weight and keep fit.

The cupuaçu fully deserves a place among the "superfruits", Let's see why. Unlike the cocoa cousin, contains theacrine (a powerful antioxidant, anti-inflammatory and analgesic) but not caffeine and theobromine.

It shows an excellent source of tannins and flavonoids such as catechins (antioxidants and astringents), quercetin (antioxidant, antitumor, vitamin regulator), kaempferol (antiviral, antibacterial and effective against diabetes, leukemia and numerous cancers), and theograndins.

It is a fruit rich in fiber, amino acids, fatty acids including omega-3, vitamins (A, B, C, E) and minerals, including iron.

Its regular consumption helps lose weight, lower blood pressure, to regulate the activities of the liver, to maintain an excellent state of health by preventing numerous forms of cancer: the intake of cupuaçu has shown a positive activity in case of cancer of the oral cavity, breast, bone marrow, liver, skin .

Also discover the properties and benefits of cocoa, a cousin of Cupuaçu 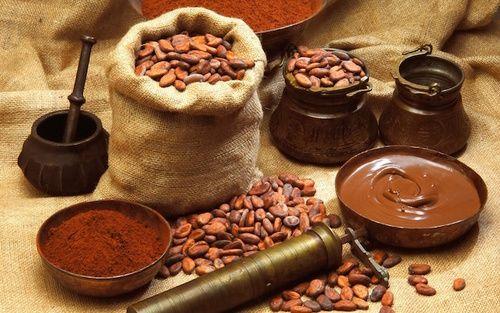 Some secondary metabolites contained in the fruit pulp are negligibly toxic to humans while it has a rather important intoxicating action in pets, given their difficulty in metabolizing these molecules.

International commercial rights to cupuaçu have been strongly claimed by Brazil after a patent battle with Japan, as this fruit is recognized as a valuable national resource.
In the local languages ​​of the Amazon the term "cupuaçu" means "Fruit of the gods".

How to eat cupuaçu

In European herbalists and agri-food markets (often online), the pulp is often sold in the form of puree or cupuaçu donkey.

The fresh ripe fruit has a hard, brown exocarp, which reveals a green background when scratched on the surface. It only takes a few sharp blows with a tool such as a hammer or on a hard surface such as a table, workbench or stone to crack it.

The white pulp, at first glance homogeneous, is actually divided into small sections, each of which covers a seed. With the pulp, as well as juices and purees, they are also produced sweets and ice cream. Finally, herbal products such as supplements, pills, lotions and other remedies are drawn from it.

READ MORE
The properties, benefits and contraindications of Chayote, a tropical fruit

Other articles on cupuaçu:

> Cupuaçu butter: properties, benefits and use

Audio Video Cupuaçu: properties, benefits, how to eat
Prebiotics: benefits, contraindications, where they are found ❯

add a comment of Cupuaçu: properties, benefits, how to eat