Cucumber, the moisturizing food for your summer 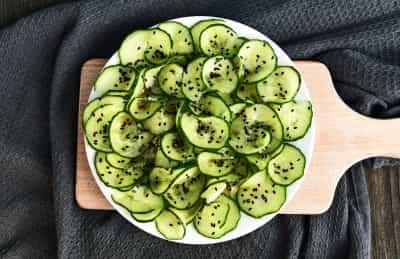 Cucumber is 95% water. Consequently, it is a food very moisturizing.

In the summer, we need more hydration than butie the cucumber is useful for guaranteeing the body the right amount of liquids, helping to rebalance the water balance.

For all its qualities, cucumber is one of the most valuable foods for the summer diet.

The qualities of cucumber

In addition to being highly moisturizing, cucumber is nearly zero-calorie; 100 grams of cucumber pulp, in fact, provide less than 20 calories.

Consequently, in addition to promoting proper hydration it helps also to keep the line and not only for the limited calorie content; cucumbers, in fact, contain tartaric acid, a substance that prevents dietary carbohydrates from turning into fat.

A cucumber as a side dish during meals it is an excellent ally of the line.

But its qualities don't end there. The cucumber, in fact, contains a fair amount of minerals, above all potassium and, therefore, it is also useful for helping the body to recover the minerals that are lost with sweating, more accentuated in summer due to the heat.

The enzymes contained in the cucumber facilitate the assimilation of proteins and, at the same time, carry out adetoxifying and purifying action. Eating cucumbers promotes regular bowel activity and helps prevent stone formation.


Read also Cucumber juices, a load of vitamins and minerals >>

Cucumber is a very simple food to be included in the diet, here are some ideas to consume it often, guaranteeing the body proper hydration:

> As a hunger breaker: cucumber, in the face of very low calories, has a high satiating power. Consumed as a mid-morning or mid-afternoon snack, it helps curb appetite and quench thirst. We can also take it with us to the office.

> In centrifuged: being very rich in water it is a perfect ingredient for summer centrifuged. Some idea? For example, an excellent centrifuged with cucumber and ginger is thirst-quenching, moisturizing and purifying. Or a juice of cucumber, melon and peach, refreshing and useful for protecting the skin from the sun.

> As a contours: on its own or in mixed salads, cucumber is excellent for light, moisturizing and very quick side dishes to prepare.

> At the beach: a few cucumbers in the fridge bag are very useful for containing thirst and also not to immediately dive into slushes and ice creams when the heat is felt.


> As a starter: in the summer we arrive at meals more thirsty than hungry and we often throw ourselves on soft drinks and other beverages. A cucumber-based appetizer satisfies the desire for something refreshing in a natural and light way.

And ... please, do not throw away the peel; you can use it to soothe redness due to sunburn or to combat dark circles and puffy eyes.

Other moisturizing foods for the summer

In addition to cucumbers, they are summer and moisturizing foods: watermelon, which belongs to the same family; melon, lettuce, tomatoes… and, in general, all seasonal fruit and vegetables.

Let us always remember: nature gives us what we need when we need it; eating fruit and vegetables in season, therefore, helps to follow a healthy and balanced diet.

Audio Video Cucumber, the moisturizing food for your summer
Algae and their food use ❯

add a comment of Cucumber, the moisturizing food for your summer