Crosses on inclined bench to cables 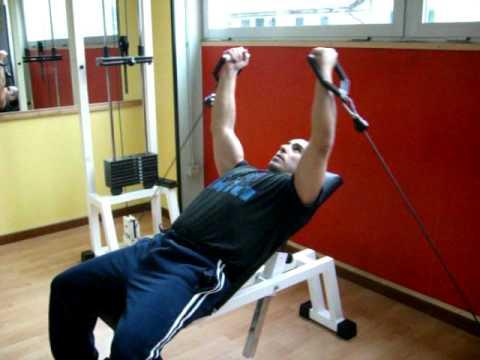 The starting position sees the athlete sitting on a bench inclined at 20 ° and 45 °, with his back in his position of strength, legs apart and feet firmly resting on the ground behind the knees to favor the maintenance of the three natural curves of the back and to support weight more effectively. The elbows are slightly flexed, the wrists straight or flexed, and the shoulders are extended and partially adducted in different proportions depending on the angle of the bench. The handles are held at the same height as the sternum with a neutral grip. The execution consists in flexing and abducting the shoulders so that the handles trace an arc of a circle on the same vertical plane perpendicular to the floor (not to the bench) on which they were at the start. The execution ends when the hands come to touch or cross each other.During the entire execution of the exercise it is advisable to place part of the weight on the feet.


Action
Upper scapular rotation
Audio Video Crosses on inclined bench to cables
Main Exercise: What it is and what it is used for ❯

add a comment of Crosses on inclined bench to cables