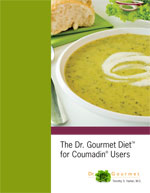 During the treatment with Coumadin, no food is strictly prohibited. However, it is important to pay close attention to the consumption of all those foods that can interfere with clotting, reducing or amplifying the action of the drug. These foods do not necessarily have to be removed from the diet, but it is sufficient to consume them moderately and above all in constant quantities over time.

The patient treated with coumadin should pay particular attention to their own diet, without ever forgetting to be particularly exposed to the risks of "do it yourself" or "do it yourself" diets, which for no reason should be undertaken.

What Foods To Avoid

If properly informed by the client, trained dieticians and nutritionists are well aware that foods rich in vitamin K hinder the anticoagulant effect of coumadin. This obviously does not apply to friends or to generalist magazines and websites, whose advice - unless otherwise specified - does not take into account the therapy in progress.


Traditional dietary recommendations for individuals on coumadin therapy consist of careful limitation of the following foods:


Among the foods of animal origin that are particularly rich in vitamin K, the liver stands out, which should therefore be replaced with other types of meat. Whole grains (pasta, rice, bran, polenta) should also be avoided, while traditional ones do not create problems.

As for drinks, alcohol, caffeine, ginger, green tea and cranberry juice can interfere with the drug's effectiveness. Therefore, pay attention not only to coffee but also to drinks that contain caffeine, such as those like cola or Red Bull. Avoid spirits.

It is also important to take the drug on an empty stomach, between meals. Otherwise, due to the interference of some substances contained in foods and the variability ofsupply daily, the absorption of coumadin can be erratic and produce "ups and downs" in the effect.


It is not necessary to deprive yourself of particular foods, but for some of them it is necessary to keep the daily intake constant.

It is therefore more important to stabilize the intake of vitamin K with the diet, rather than "going crazy" to eliminate the main food sources.

The diet must be regular in quality, quantity and times.

The foods listed above, for example, can be eaten in modest quantities every day, without ups and downs. Take this recommendation into account even when, for example, you go on vacation, because this is very often accompanied by a temporary change in eating habits.

The foods to keep under control are mainly vegetables.

You don't have to decrease or increase the vegetables, you simply have to consume a constant amount.