Conflicts: Why Do They Occur? 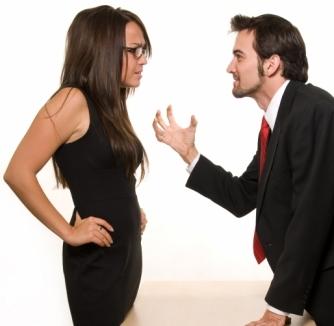 Everyone, at a particular time
in our life we ​​have been involved in a conflict. Sometimes we find ourselves
in the same without realizing it. For this reason, analyze why
arise conflicts It is not something
useless but it can help us to solve them starting from the understanding of
cause.

First you should know that
conflict is a social product and a "natural" consequence of interaction
Human. Conflict is a dynamic system in which events and the
understanding of people are constantly regenerated and reinterprets so much the
past like present and future. The conflict process
possesses such a level of fluidity and complexity that the trajectory of the
itself is never fixed from the beginning. Small and unexpected gestures, the
actions… everything can affect the result. Filley in 1989, I will enumerate nine
conditions that make the appearance of the conflict possible: 1. Ambiguous Jurisdictions: when two parties have responsibilities
in relation to each other without the limits that separate them appearing clear. You
there are great possibilities for conflict situations to arise. 2. Conflict of interest: this situation is associated with
forms of evaluation and projections relating to objectives and activities in common. 3. Communication barriers: communication barriers e
generally the difficulties associated with them facilitate the onset of
conflict situations between the parties. The degree of knowledge of a party
with respect to the other it has to do with the appearance of conflicts. 4. Addiction: when one party depends on the other, conflict situations are very likely to arise. 5. Differentiation of the organization: when the degree of differentiation of an organization increases, yes
increase the chances of conflicts arising, given the differences
in the levels of authority they can create difficulties in communication or disputes
jurisdictional. 6. Association of the parties: when the parties have to take
decisions together, the chances of seeing conflicts arise is greater. 7. Need for consent: if consent is required between
both sides this can contribute to the emergence of conflicts. 8. Behavioral Regulations: if the
interests of the parties clash with the content of the rules
behavior, conflicts are very likely to arise. 9. Previous Unresolved Conflicts: if there are any previous unresolved conflicts between the parties they can
encourage the emergence of new conflicts. The fact of understanding what is there
underlying the conflict allows us to assume a privileged posture in
itself, since we will be able to guide the resolution procedure. For example, the
conflict appears as a result of an ancient unsolved problem? Then
it will be necessary to work on it and bring it back to light. On the contrary, the
conflict arises because communication between people is poor? The solution
lies in trying to improve communication channels, introduce new ones
ideas and listen patiently to those of the other person. In fact, very often
it happens that they both say the same things but find themselves locked in their points
they do not realize the convergences by sight. Finally, it must be said that the
conflict has always clothed itself with a negative aura, but so can too
lock up positive aspects. Everything will depend on how you deal with the term,
allowing the parties to transform and overcome it with or without help
of third parties.
The prejudices that affect us, how are paradigms formed? ❯

add a comment of Conflicts: Why Do They Occur?