Coconut milk: properties, uses and where to find it 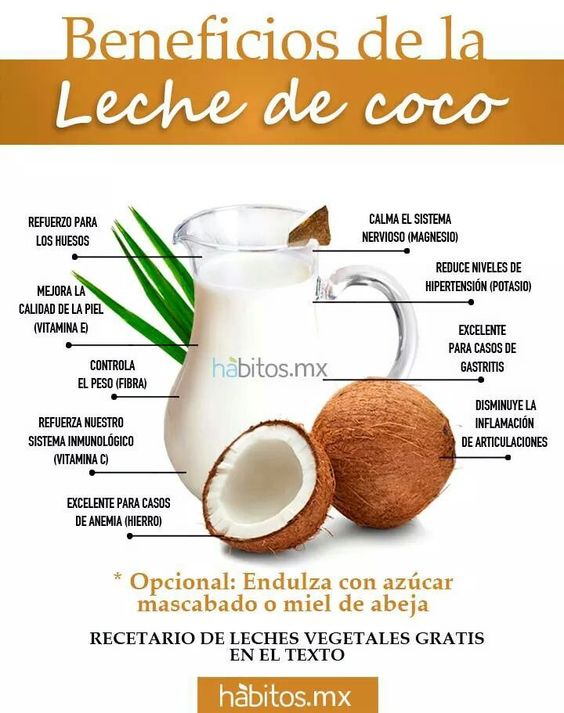 Year after year, more and more people find that they are lactose intolerant and more and more people decide to avoid cow's milk for ecological or ethical reasons. Whatever your motivation, you have one more to drink the coconut milk: it is extraordinarily nutritious and new properties have recently been discovered that make this drink one of the best milk substitutes.

There are several benefits of this drink. Here we summarize the 5 main ones:

It is a good source of minerals, scarce in cow's milk and other beverages that try to mimic milk, in particular antioxidants such as selenium and magnesium, but also key micronutrients such as potassium, iron and zinc.

To a lesser extent, it represents a source of vitamins C and E, also powerful antioxidants protective against the action of free radicals.

Half of its fat is made up of lauric acid, which despite being a saturated fat, has been shown to decrease LDL cholesterol levels (bad) in favor of HDL cholesterol (good), and to have a strong antibacterial and antiviral action (here I study).


READ also: Healthy nutrition: here are the 9 fats that are good for you

It increases the sense of satiety

It is an excellent satiety regulator: a study has shown that the particular fats of coconut milk lead to consuming an average of 256 fewer calories per day (source). This is also thanks to the contained fibers, unlike cow's milk which is totally devoid of it.

A glass of coconut milk is a valid natural remedy to calm the symptoms of acid reflux.

Where is coconut milk found?

At this point you have to pay attention to do not confuse milk with coconut water, as they are two totally different drinks from a nutritional point of view: the first is nothing more than the coconut pulp in liquid form, the second is the water contained within it, the same as the famous green "drinking coconut".

Il coconut milk found in natural food stores in cans or cartons, sometimes mixed with other plant milks (usually coconut rice). For the pure coconut milk, the price can be a hindrance, but the good news is that it can easily prepare at home by blending the coconut pulp or starting with grated coconut (you can buy it in plastic bags at the supermarket), soaking it in hot water and then filtering it.

How to use coconut milk: some tips

It's possible use coconut milk in various ways. It is great from add to fruit smoothies and fresh vegetables, making them even more tasty and special.


Si goes perfectly with coffee (and being sweet, you can avoid adding sugar, for those who can't do without it), or you can simply enjoy it as a drink in its own rightAnd. In the latter case, however, it is recommended to moderate the quantity for those who want to lose weight, being still rich in fat and counting about 250 calories per glass.

If, on the other hand, you want to venture into exotic recipes, remember that coconut milk is a fundamental ingredient of important cuisines such as Thai and other African and Southeast Asian countries.

You can also use coconut milk in the do-it-yourself cosmetics instead of yogurt and cow's milk for the “vegan” versions of the various creams or self-produced cosmetic preparations.

Audio Video Coconut milk: properties, uses and where to find it
Organic almond milk: how to prepare it at home ❯

add a comment of Coconut milk: properties, uses and where to find it