Chufa flour, properties and use

The chufa flour is a food with remarkable nutritional properties, obtained from the Chufa, a very common tuber in Spain. Rich in vitamins C and E, chufa flour is useful against cholesterol, in the prevention of arteriosclerosis and to promote digestion and a sense of satiety. Let's find out better.

> 2. Properties and use of chufa flour 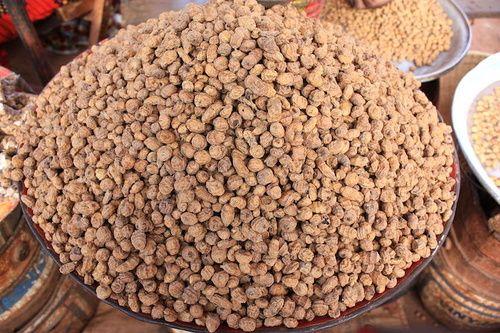 How chufa flour is made

Chufa is a tuber, brown in color, the plant of which is widespread in Valencia (Spain). Its Latin name is Cyperus esculentus and it is also known as babbagigi, sweethammer or ground almond.

He recently got the designation of origin to protect its quality, which made it the basic ingredient of a very famous drink.

The basic ingredient obtained from the Chufa tubers is a particular flour whose flavor is very pleasant, sweetish, similar to hazelnut.

Properties and use of chufa flour

Chufa flour has many properties that make it a food with important nutritional characteristics. These are:

Chufa also has a low sodium content and it contains neither lactose nor gluten. Thanks to all these various properties, Chufa has been defined by nutrition experts as a complete food from a nutritional point of view, as it is able to provide the body with all the macro and micronutrients that are important for its well-being.

Chufa tubers can be eaten both raw and cooked, fresh or dried; but above all the chufa can be used in the form of flour, which lends itself well to the creation of excellent desserts. Chufa flour can also be added to cereals, yogurt or vegetable milk.


However, the famous Valencian drink is a typical preparation with chufa flour: l'Horchata de Chufa suitable for vegetarians and vegans as an alternative to milk, as a totally vegetable drink.

With the chufa flour you can also prepare some natural creams to spread on bread and biscuits.

In Spain the Chufa is used for the preparation of a typical drink: l'Horchata. The preparation varies according to the basic ingredient: if you use the tuber you need a soaking and a final filtering after the passage in the blender, if you use flour, the procedure will be similar to that of preparing a milkshake, putting together the cold-chosen ingredients.

For sugar, the recommended dose in a liter of water is between 50 and 100 grams, but the less you put the better. Like all natural products, so that it does not lose its properties, the Horchata must be consumed within three days from its preparation, and is preferably served cold.

add a comment of Chufa flour, properties and use