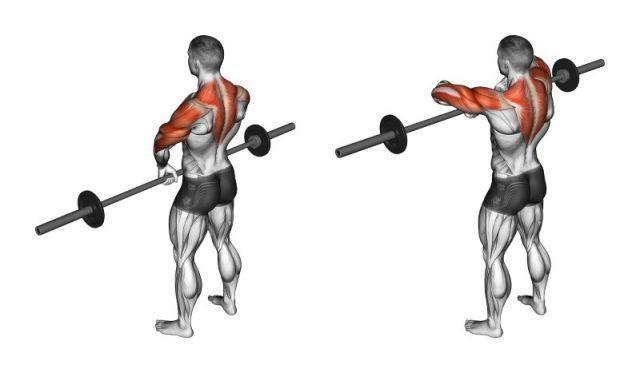 The starting position sees the athlete standing upright with the back in his position of strength, the knees slightly flexed and the distance between the feet equal to or slightly greater than that of the shoulders. The arms are at the sides with the elbows extended. The barbell is held by both hands in pronation and placed on it at a distance slightly greater than that between the shoulders. The execution consists in lifting the barbell vertically to bring it closer to the chin until it touches it. The movement must be performed without the help of the thrust of the lower limbs unless you want to use the cehating technique. During the ascent of the barbell the humerus lies almost on the longitudinal plane on which the body is also located so that from a lateral view the elbows and thorax are almost perfectly aligned. The execution ends when it is not possible to raise the shoulder blades further. During the ascent, the grip and position of the wrists change automatically to allow for movement.