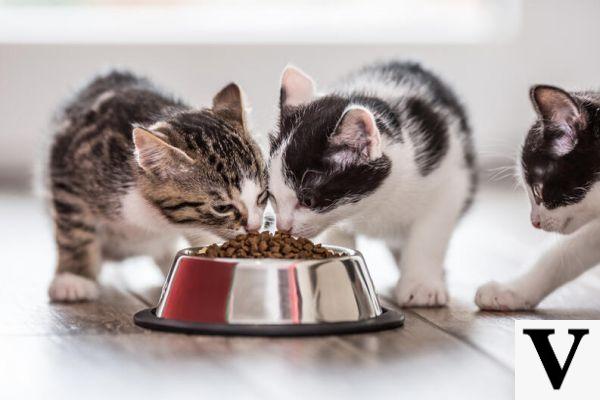 Animals are unable to effectively communicate any physical discomfort.

By altering their behavior and vocally complaining they are able to launch a sort of "alarm". However, without the intervention of a veterinarian it is difficult to understand why.

Certain cat diseases have a rapid and violent onset. They are almost always caused by bad lifestyle habits and get worse over time.
On the other hand, this means that both prevention and therapy are easily adopted.
There is a very strong correlation between the cat's diet and the incidence of diseases (even fatal) that can afflict it.
Below we will understand better what they are.

Some examples of pathologies that progress subtly, sometimes asymptomatically up to irreversibility, are:


Some of these diseases are clearly visible and can be recognized even by the owner of the animal.
Obviously, the diagnosis and treatment must be established by a veterinary professional.

Observation of animal behavior, symptoms and clinical signs remains one of the most important prophylactic factors in reducing the risk of mortality and definitive functional impairment.
The pathological signs that need to capture the most attention are:

For further information: Sphynx cats, the most frequent diseases

To ensure the health of the cat it is necessary to prevent the onset of diseases and / or related complications.
As we will specify in the other dedicated articles, dry food can be an effective cause of diseases affecting the domestic feline.
This leads to a very important nutritional imbalance, which implies:


Below we will analyze the feeding-related disorders in cats.

In cats, obesity is a common and very serious problem.
Overweight felines are four times more affected by the development of diabetes.
The cat's diet must be rich in protein, low in fat and almost totally free of carbohydrates.
In the cat's metabolism, excess sugar is not used properly by the tissues and these nutrients end up being converted into fat.
The so-called "light diets" for cats, distributed by the most popular brands, have mistakenly targeted only the fat content (decreasing it) and increasing the intake of carbohydrates instead of proteins.
The optimal diet for cat weight loss should have:

Several studies state that cat weight loss can be achieved more easily with protein diets, which prevent catabolism and promote the preservation of muscle mass.
However, commercial foods are at best too high in fat. At worst, the most abundant element is the fraction of carbohydrates.
The best way to promote cat weight loss is to increase the amount of water in meals, optimizing satiety; at the same time, it is advisable to increase the animal's physical activity, for example by letting it play.

Diabetes is a serious, frequent and difficult to manage feline disease.
Not all the etiological causes are known.
Diabetes arises with impaired glucose tolerance, hyperinsulinemia, and insulin resistance; the final stage is characterized by insulin insufficiency and requires drug therapy (injection of synthetic insulin).
On the other hand, sure diabetic cats subjected to the reduction of carbohydrates in the diet, they improve significantly and no longer require the injection of pharmacological insulin (or decrease the dose).

It is logical to say that high carbohydrate diets could be a significant risk factor for feline diabetes.
It is advisable not to underestimate the nutritional impact of the low carbohydrate diet on hormone secretion and tissue sensitivity. .
A sugar-free diet is more effective than most of the diet foods advertised by industries. On the other hand, if the cat is already diabetic, it is advisable to adjust the amount of insulin administered to the new diet. In fact, with a hypoglucidic diet, the cat tends to have less need for the drug; in such circumstances, giving too much insulin could cause hypoglycemia and hypoglycemic shock.

Chronic renal failure is the leading cause of cat mortality.
Chronic dehydration plays an essential role in causing or exacerbating this condition.
The fundamental objective is to maintain the state of hydration, which is why it is reasonable to exclude all dry foods from the diet.
Some companies suggest treating kidney failure in cats in a similar way to humans and offer low-protein foods called "special diets".
Unlike humans, the cat's kidneys are inclined to manage a protein-only diet. On the contrary, the same does not happen for the lack of water and the excess of carbohydrates and fats.
There are no clinical studies supporting a low-protein diet in cats with kidney failure or in domestic felines with any other disease.
On the contrary, it has been observed that many cats whose nutrition is deficient in animal proteins undergo muscle catabolism. It is a form of "self-digestion" which induces a breakdown of muscle tissues and an increase in creatinine and ammonium in the blood.
Moreover, the excess of these compounds would require a large commitment of renal filtration which cannot occur due to the disease. As a result, creatinine and ammonium blood values ​​rise, leading to the erroneous deduction that the condition is deteriorating.

Cystitis and stones are very common and painful problems for cats.
Cystitis causes the feline to urinate inappropriately, in small doses and often outside the litter box.
Stones (which are NOT crystals) can block the flow of urine, preventing or complicating urination.
In these cases it is essential to observe the behavior of the cat, which if it repeatedly enters and exits the litter box without nudging it could have a serious problem.
It is very useful to use the aggregating litter, which also offers a quantitative value of the urine.
There is a theory that bacterial cystitis could be fought by acidifying the urine. In the wake of this hypothesis, some companies have dedicated a specific line of foods to acidify the urine. These nutritional regimes are rich in carbohydrates (which instead make the urine basic), low in magnesium and potassium. They favor the onset of kidney stones and probably increase the burning of cystitis.
Only 1% of cats with cystitis under the age of 10 suffer from urinary tract infection. Nonetheless, many vets still administer antibiotic therapy and forget to recommend a water-rich diet.
In cats over 10 years of age, infections are more common, due to the higher incidence of kidney disease and the consequent reduction in urination.
With age, diabetes and hyperthyroidism also become more common and make animals more prone to urinary tract infections.
Only 20% of older cats with cystitis suffer from a bacterial infection, which is why a urine culture is always recommended. This examination will specify the relevance and type of antibiotic therapy.

After 30-60 minutes from expulsion, cat urine can form crystals. This also occurs under physiological conditions and increases with the chemical concentration of the liquid.
The possible presence of crystals in the litter or in the test tube is not alarming; on the other hand, it is better to remember that infrequent urination caused by dehydration could favor the synthesis of crystals even within the urinary tract.
The only prevention system for all these ailments is the increase of food water, preferring wet food and adding it with a little water.

Inflammatory bowel disease is a cat disease that causes vomiting, diarrhea and / or constipation.
Sometimes it is the reason for apparently unjustified weight loss or frequent vomiting of hairballs.
This disease is poorly understood but responds well to a diet without dry food. On the contrary, veterinarians often administer steroid-based drug therapy right away.

Many cat foods are fish based.
This would seem far from wrong, as these are foods rich in protein, water, low in carbohydrates and low in fat.
However, these foods are high in mercury, PBDE (chemicals linked to hyperthyroidism) and phosphorus (excess of which is potentially harmful in the kidneys of older cats).
These products cannot be used continuously or frequently and should make room for foods that contain meat from land animals (especially poultry).

Hepatic lipidosis is the most common liver disease in cats and mainly affects people with diabetes and overweight.
The treatment consists of an increase in motor activity, an increase in proteins and a reduction in carbohydrates (if in excess, including lipids).
Prolonged fasting can be extremely harmful.

Some believe that cats fed dry food are less prone to developing dental disease; it is an inaccuracy.
The treats are rich in carbohydrates, easy to ferment for the bacteria that cause gingivitis and tooth decay.
Most cats swallow treats without chewing them, eliminating the mechanical stimulus necessary to maintain the strength of the teeth.
Additionally, the feline's dentition is primarily designed for grasping and tearing, not chewing.
Instead, it is advisable to feed the cat with raw meat, preferably with bone, tendons and ligaments. Some use lightly cooking it to kill surface bacteria. In this way it is possible to maintain the mechanical stress on the teeth, avoid carbohydrates and increase the calcium intake (essential for the health of the teeth).

Other articles on 'Cat Diet and Health'