Carnival sweets: here are three simple recipes to make the typical delicacies of this festival or the chatter, damselfish and black pudding however, following the vegan principles. As always, in the preparation of the various dishes we recommend the use of Organic products and related to your territory, in other words: at zero kilometers!

Chat, rags or frappe? The important thing is that they are green! 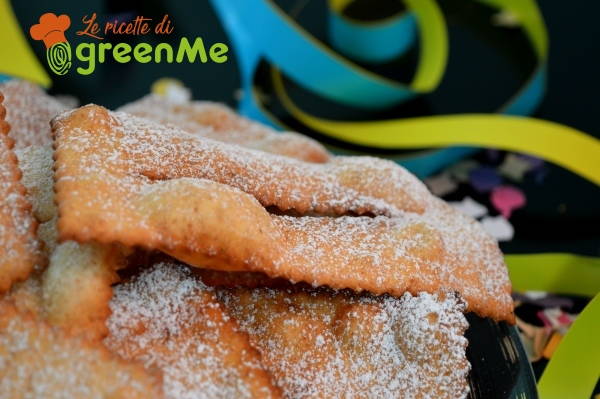 Typical of the Lombard tradition, the chatter of Carnival changes its name from region to region. In the north as well as in the south they are generally called by their original name, but in Mantua and its surroundings they take the name of instead lettuce, in Tuscany they are called Cenciin Trentino grostoli, in Liguria Lies, in your city hit.
This time we have decided to offer you some variations to the traditional recipe, to offer you un Carnival cake prepared following the principles ofvegan food. In fact, instead of the traditional ingredients derived from animals, we have suggested the use of products of plant and natural origin, such as water, oil, fruit, or maple syrup soy yogurt, instead of unlikely margarines of uncertain origin and invoice.

For the preparation you will need:

Place the flour in a fountain and put in the center the oil (or maple syrup), sugar, lo soy yogurt (or the mashed banana to which you will have to reach a couple of tablespoons of water to soften it and reduce it into a homogeneous mush), grappa and wine, grated lemon zest and a pinch of salt.
At this point make a dough and work it for a long time with your hands, until you get a smooth and elastic compound. Once this is done, form a ball, cover it with a kitchen towel and let it rest for at least half an hour in a cool and dry place.

After the time has passed, roll out the dough with the help of a rolling pin wooden e make a sheet of it with a thickness of about 3-4 millimeters.

With the toothed wheel make many rectangles (we recommend size 6 by 4) but if you prefer you can cut it into as many squares as you want.

In the center of each rectangle (or square) make two cuts and then dip them in boiling oil until they are golden brown on both sides.

Put them on blotting paper, let cool and cover with powdered sugar before serving. Your vegan chat they are ready!

For a lighter, dietary and digestible recipe, instead of frying them, you can bake your chat in the oven for about 20 minutes, or until they are golden brown. 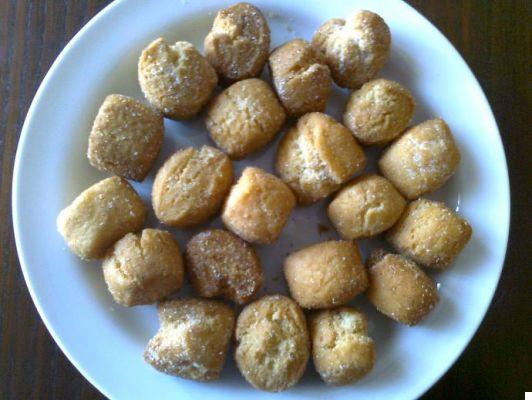 Widespread in Friuli Venezia Giulia, in Emilia your city and in your city, castagnole are one of the best known and most enjoyed typical sweets during the Carnival period. Again, we have made some changes to the original recipe, inserting ingredients of vegetable origin

It will serve you:


Place the flour in a well and mix all the ingredients, except of course the oil for frying and the icing sugar, which you will only need at the end to sprinkle and decorate your damselfish.
Make a smooth and elastic dough and let it rest for about half an hour.
After this time, take the pasta again, make many balls of the same size and fry them in oil boiling for about 10-15 minutes.
Drain them, put them on absorbent kitchen paper, let them cool for a few minutes and sprinkle them with icing sugar. You can serve them warm or cold. 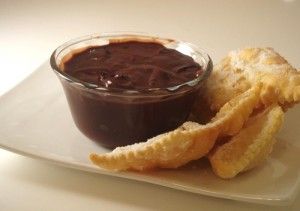 Originally from Calabria, Campania and Basilicata, the black pudding is an ancient carnival sweet made with chocolate, which in the past it was made with the addition of pig's blood (hence the name blood sausage).
Today the recipe has changed (also because the use of pig's blood has been banned) and many chefs delight in proposing the most bizarre and original variations. We at healthiergang.com are no different and we have invented this tasty recipe, simple to make and above all in line with the our vegan and green style also suitable for the many people who are intolerant to cow's milk. ingredients:
- 1 liter of soy milk
- 400 g of brown sugar
- 200 g of bitter cocoa
- 1 pinch of cinnamon
- 1 pinch of carob powder
- a vanilla pod
- 60 g of corn starch
- small pieces of dark chocolate
- chopped hazelnuts Blend the brown sugar in a blender for a few minutes (to make it finer) combine all the ingredients in a saucepan (except the pieces of dark chocolate and the grains), slowly and little by little adding the cornstarch, and mix well to avoid lumps.

At this point put the pot on the stove over low heat, continue to stir with a wooden spoon, to prevent the mixture from sticking to the bottom, and when the cream begins to thicken, before it starts to boil, lower the heat to low and stir for a few more minutes.
Once this is done, pour the cream into glass bowls and let it cool. Put it in the fridge for a few hours and, before serving, decorate the cups with small pieces of dark chocolate and chopped hazelnuts.
Your vegan black pudding is ready! And as always ... enjoy your meal!

add a comment of Carnival sweets: the vegan recipe of chiacchiere, castagnole and black pudding