Carasau bread it is a typical thin and crunchy Sardinian bread with remarkable nutritional properties but to be consumed in moderation in case of overweight or diabetes. Let's find out better.

> 1. Properties and benefits of carasau bread 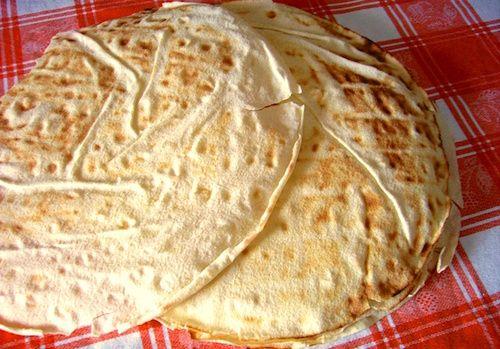 Properties and benefits of Carasau bread

Pane carasau is a Sardinian bread with a characteristic round shape. It consists of a very thin and crunchy pastry whose ingredients are simply given by wheat, water, salt and yeast.

Carasau bread is fat-free and its lipid content is negligible. There lack of crumb causes its water content to be very low.

Carasau bread has a higher caloric intake than ordinary bread, this is due to the presence of complex carbohydrates.

The presence of mineral salts and vitamins make carasau bread more nutritious than other types of bread. It contains gluten and for this reason it is not recommended in the diet of celiacs.

Also, having a considerable caloric intake should be consumed in moderation in case of overweight or metabolic diseases such as diabetes. Its energy intake derives mainly from the presence of complex carbohydrates.

Carasau bread has a calorie content of 380 kcal per 100 g of product. Its nutritional content is as follows:

The energy supply of carasau bread is high (as it contains very little water) and carbohydrates prevail over other energy nutrients.

This food is therefore part of those products to be consumed in moderation in case of overweight and certain metabolic diseases, such as diabetes and hypertriglyceridemia.

Carasau bread for its crunchiness is also known by the name of carta musica, in reference to the noise that his chewing makes.

The term carasau derives from the Sardinian word carasare what does it mean toast. It is in fact the carasatura phase that makes this type of bread crunchy.

It is a baked food made from durum wheat, yeast, salt and water. It is a simple food but with a complex preparation. Carasau bread looks like a real one crunchy waffle; it is made up of circular sheets (similar to large wafers), totally free of crumb, no more than 40cm wide and with an unquantifiable thickness.

The color is golden and the very distinctive flavor. Carasau bread is obtained through two cooking stages in the oven. The first, which must be achieved by adjusting the temperature to the maximum (or almost) for a few seconds or just over a minute, is necessary to cause the disc to swell.


The second phase should instead be carried out at 180 ° C for about 7-8 minutes, until the bread is sufficiently dry. This double cooking, in addition to making it delicious, allows a longer conservation.

Dissolve the yeast with a little warm water, then add the previously salted water.

Work the flour into which the solution of water, yeast and salt is added. Energetically knead the dough as it is formed until a smooth and elastic dough is obtained.

Divide the dough into many loaves that will be left to rise for about 3 hours. After the leavening time, the loaves must be stretched until very thin sheets are obtained.

Bake the sheets in a hot oven for a few seconds until they are swollen. At this point remove from the oven in order to obtain two crispy sheets.