Can you lie? Find out with a test 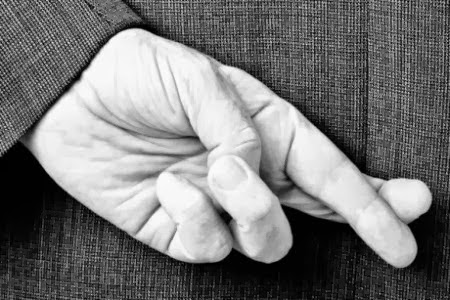 Like it or not, lies are everywhere. According to a study conducted at the University of Massachusetts, if the necessary conditions are met, about 60% of people are able to tell three lies in just 10 minutes of conversation. But some know how to lie better than others, it can be said that liars are born. I offer you a very simple test that tells us not only the ability to lie but also the way in which people interact with others.

What do you have to do?

Just draw a letter 'Q' on your forehead with the finger of your dominant hand.

What does it mean?

This simple test can give us an idea of ​​whether you are a person centered in your "I" or "others". Basically, it is assumed that there are essentially two groups of people who have different ways of seeing the world. It is worth remembering that one perspective is not necessarily better than the other, just different.

While doing this trivial exercise there are two ways to do it, some draw the 'Q' with the tail on the right side while others draw it on the left.

People who center on their "I" are those who draw the 'Q' with the tail to the right, which can be classified as self-centered people. Because? For the simple fact that they have drawn the letter in such a way that it is only legible to themselves.

These people are characterized by maintaining the same patterns of behavior in different situations and making decisions guided by their values. They pride themselves on the fact that they are direct in their dealings with others and expect others to be equally honest with them. They are people who know who they are and what they want and usually don't give in to others unless they think their demands are rational.


Due to these characteristics, these people are not particularly good at telling lies, as they have not done the necessary practice and are not interested in perfecting their deception techniques. But they are very good lie-detectors.

The people who center on the "others" are the ones who draw the 'Q' with the tail to the left. Because? Simply because, before writing the letter, they thought about how to draw it in such a way that someone in front of them can read it.

This means that they tend to worry about the opinions of others, how they are viewed and valued. This preoccupation with social evaluation can cause them to bow to the wishes of others more easily, just to satisfy them, even if they have to give up their own wishes.

They are people who like to be the center of attention and are able to change their behavior depending on the context in which they find themselves. Therefore, they tend to be more flexible and often achieve great social success.

Due to their need for approval, it is common for these people to lie in some situations and, over the years, they can become big liars. However, the funny thing is that they are not very good at detecting the lies of others.

This test was devised by Richard Wiseman, a British psychology professor, who began his professional life as a magician and is deeply drawn to everything that has to do with how humans relate to magic, luck and physical theories.

In reality this test, like all psychological tests, cannot be taken alone. That is, normally we psychologists apply tests only to prove hypotheses or to have information to start working on. However, we do not make a diagnosis based on just a single test.

For example, the fact that you are a person who centers on others does not necessarily mean that you enjoy lying. Remember that all ratings are generalizations only.

Did you know that stress shrinks the brain? ❯

add a comment of Can you lie? Find out with a test