Calculation of the maximal force 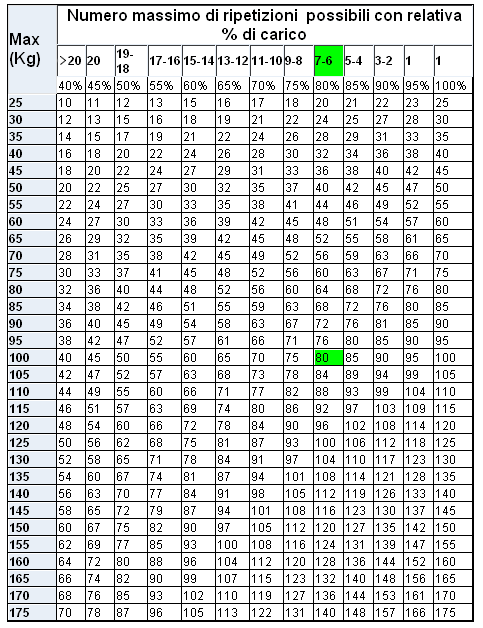 Maximal force, by definition, is "the highest force that the neuromuscular system is capable of expressing with a voluntary muscle contraction". This will be the only literary definition of the article, as my intent is not to talk about the already well-argued theme of muscle strength, but to give an overview of some of the most used tests to measure maximal strength. This parameter is of fundamental utility in planning a workout; the percentage of load lifted based on 1RM (one maximum repetition) is in fact one of the variables that - within a training program - determine the achievement of a certain goal (e.g. increase in strength, muscle hypertrophy, improvement in performance aerobics).
Maximal strength can be measured by:

By maximum load (1RM) we mean that load that can only be lifted once. It can be evaluated by:

To perform a test using the direct method, after an accurate warm-up, a few series of approaching the maximum load are carried out, performing only one repetition per series and paying attention to intensity and recovery (so as not to get tired already to the maximum test). The maximum lifting attempt must be carried out under the supervision of a partner, preferably two; the advice is not to perform the maximum lifting more than three times during the same test, and to space the attempts with breaks of 5-8 minutes; this to avoid the fatigue of the previous attempts. The load that you will be able to lift once and only represents your 1RM or 100% of the strength that you are able to express for that particular exercise. The advantage of this method is certainly the veracity of the result, as long as the test is well carried out; the risks, on the other hand, reside above all in the danger of accidents due to the use of very high loads.
In the indirect method test, after having performed a certain maximum number of repetitions with a given submaximal load, the theoretical maximum force is calculated by applying specific formulas, or by using specific tables; from this it can be deduced that the closer the load used approaches the ceiling (eg 80%), the lower the margin of error. The number of repetitions performed will be determined by the prevailing type of muscle fibers present in the muscle; therefore the following results can be found:

The equations used for the indirect method are:

The Brzycky equation allows to estimate the theoretical maximal load as a function of the number of submaximal repetitions performed:


This data can then be used to decide at what percentage of work to set the training program.


The Epley equation allows to estimate the theoretical maximum load as a function of the number of submaximal repetitions performed:


Completing 3 submaximal reps indicates that we are working at approximately 90% of 1RM.

You now have the means to calculate your 1RM. Knowing this data will allow you to structure training programs in which the load to be used will not be given by an approximate number, but by a numerical data resulting from the execution of an objective and reliable test.

add a comment of Calculation of the maximal force