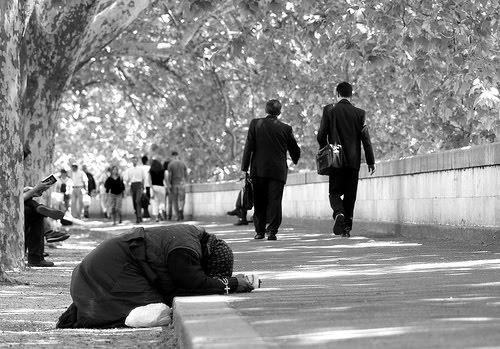 In 1964 a woman was murdered. Newspapers commented on the news stating that 38 people had heard and seen the attack but did absolutely nothing to counter it. This alarming apathy drew the attention of two psychologists: Darley and Latane, who wondered whether the fact that these people were part of a social group affected their behavior.

They immediately got to work and invited some volunteers to a discussion. These volunteers were told that the conversation they were going to have would be absolutely private, which is why people would find themselves in separate rooms and communicate through an internal telephone system. During this communication one of the members would have pretended to have an epileptic fit that the interlocutor could have perceived through the telephone. Of course, in order for the person in the next room to realize what was happening to his gossip partner, the actor was asked to say the following words in a very serious tone: "Ahhh ... I'm having a seizure." When people believed they were having a private conversation with the person affected by the attack, 85% of them left the room to help their interlocutor. Of course, one way or another, when establishing a conversation between two people about a very personal topic, it is quite logical that we care for each other and offer our help when needed. At this point the researchers changed the conditions of the experiment: they included three more people in the conversation, thus forming a small group of four people who conversed with each other about intimate topics. One of these simulated a seizure. Result? Only 31% of the other people went to the alleged epileptic's rescue, the rest simply thought that someone else would have done it before them. How can these different behaviors be explained? Researchers speculate that if a single person is faced with an emergency situation, the pressure and weight of responsibility push them to act quickly to help. But if this same person is part of a group, he will feel less pressure and less responsibility for what is happening and for this he is very likely to delay more in responding to the emergency. The definition was coined from this experiment: Effetto Bystander; phenomenon that refers to people who do not offer their help in the face of an emergency situation when there are also other people present on site with them. In this way, a kind of inverse correlation was established: as the more people coexist in an emergency situation, the less tendency they will show to offer their help. Of course, the reasons for this effect are very varied and do not depend only on the need to shift responsibility, as Darley and Latene claimed. People can experience the Bystander Effect because the vast majority of them are victims of a semi-automatic reactivity: they evaluate the reactions of those around them to determine if it is necessary to intervene. It goes without saying that precious time is lost in this evaluation. Another possible cause is that people tend to underestimate themselves with thoughts like "someone more qualified than me will intervene". However, although the causes may be many, the effect is the same: we tend to paralyze ourselves and not offer our help.

Flynn Effect: Each generation is smarter than the previous one ❯

add a comment of Bystander effect and social apathy; a strange experiment