Burger King® and the moldy sandwich 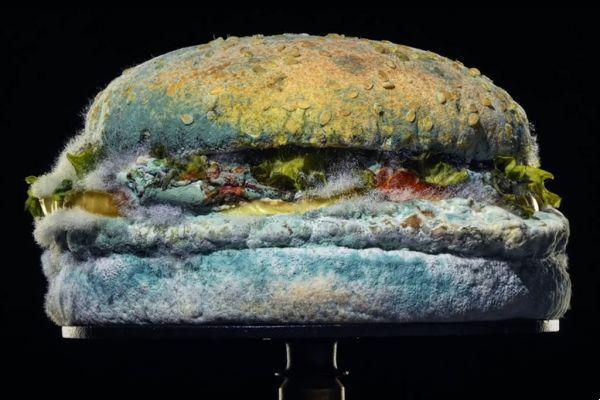 Burger King®, an international fast food chain, is launching an advertising campaign to announce to consumers that, by 2021, artificial colors, flavors and preservatives will be removed from the famous burgers.

The slogan- The beauty of real food is that it gets ugly- is impressive, as is the time-lapse video released on social networks and entitled The Moldy Whopper.

Forty-five seconds in which the iconic sandwich of the made in US brand slowly deteriorates and then molds.

The burger that comes from Florida

Whooper® was born in 1957, the most famous of fast food burgers.

Burger King Delivery® arrives in Europe in the seventies and becomes a global giant: it is estimated that almost 11 million people eat a meal every day, so much so that whopper® has become one of the most popular sandwiches on the planet.

Burger King® declares its total openness to attention to the issues of sustainability, innovation, food health and waste.


Most of the packaging is made of paper and separate waste collection is proposed in all points of sale.

In addition, an experimentation project is active in some fast food restaurants of the chain plastic free to eliminate straws, cutlery and other residues of plastic materials.

Furthermore, the particular grilling is aimed at eliminating most of the fats of the meat.

Always a competitor of McDonald's, BK aims to make a difference in the quality of the products offered, as well as for its own internal policies.

The jab therefore appears evident: the moldy sandwich mimics the MacDonald burgers that have been preserved intact for years in the famous experiments of which we remember that of the two Australians Casey Dean and Eduard Nitz.

In almost 400 outlets noIn the United States, preservative-free sandwiches are already available, while in the rest of the world they will be available by the end of 2021.

On the notes of the song What a difference a day makes by Dinah Washington, in less than a minute, the famous Whopper completely decomposes: the whole process actually takes 34 days, from production to the appearance of mold.

A sandwich that is far from perfect for a policy that aims to win over a public attentive to food.

add a comment of Burger King® and the moldy sandwich