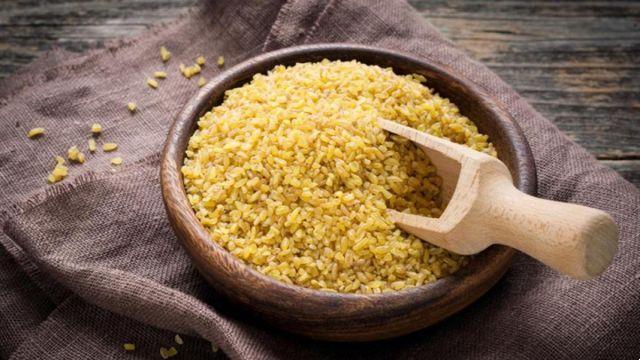 Properties and benefits of bulgur

Il bulghur it is an edible cereal made from dried and broken wheat, most commonly durum wheat but also other wheat species. It is parboiled or partially cooked, so it can be prepared relatively quickly.

When cooked it has a consistency similar to couscous or to Quinoa. It is considered a whole grain, which means that the entire grain of wheat - including germ, endosperm, and bran - is eaten.

The routine consumption of fiber-rich whole grains, such as bulgur, is associated with multiple health benefits, including disease prevention and better digestion.

Adequate intake of high-fiber foods - such as whole grains, fruits and vegetables - can promote health heart health. One study revealed that people who consumed 3-7,5 servings (90-225 grams) of whole grains per day had a 20% reduction in their lifetime risk of heart disease.

Bulgur is not only tasty and quick to prepare, but also very nutritious. Because it is a minimally processed grain, it retains a higher nutritional value than more refined grain products.


In fact, it contains a variety of Vitamins e minerals, as well as a significant amount of fiber. In fact, a single serving provides over 30% of the Reference Daily Intake (RDI) for many nutrients.

It is a particularly good source of manganese, magnesium e iron and also slightly higher in calories than other comparable whole grains, such as brown rice or quinoa.

A portion of 1 cup (182 grams) of cooked bulgur provides:

Again, its high fiber content is a plus for the slowing down of sugars. The positive effects of bulgur consumption on blood sugar levels have been shown, as well as helping people with diabetes achieve a slower rise in blood sugar than white, wholemeal or rye bread.

Bulgur has been called by many names. The Roman word was cerealis; the Israelites called him dagan; while other Middle Easterners called it arisah, and this is how it was referred to in the Bible.

Biblical scholars translate the arisah as "the first of the big meal" and, according to biblical archaeologists, it was a porridge prepared with parboiled wheat and dried in the sun.

A recipe with bulgur

Have you ever tried thebulgur salad? To start, prepare the bulgur. Since it is already partially cooked, all you have to do is place it in a bowl with boiling water, cover it with plastic wrap and let it steam for 30 minutes or until all the water is absorbed.

In the meantime, prepare the vegetables and spices: cucumbers, red peppers, red onion, parsley. When the bulgur is cooked, break it with a fork and then add the vegetables along with the chickpeas. Season with a splash of lemon and extra virgin olive oil.