Buckwheat leaves: benefits, toxicity and use 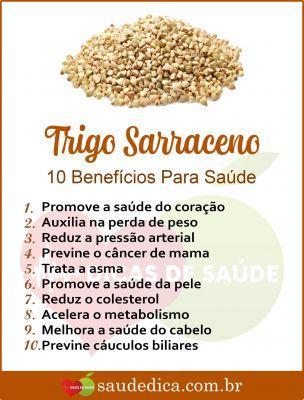 We know it very well for the succulent Saracen or Taragna polenta, typical of some areas of Treviso and Valtellina, where with buckwheat the famous pizzocheri are also produced.

It is also known because, not containing gluten, Fagopyrum Esculentum is a grain widely used by those who are intolerant of it, therefore ideal for celiac.

But it is not only the beans that are so precious, in fact even the lesser known are leaves. Let's find out why and why too it is good not to abuse buckwheat grass.

The small triangular and ovoid leaves of buckwheat, which grow at temperatures around 20 ° C and need a lot of water, contain precious substances yes, but they can be also toxic to the liver and body.

Coupons contain up to 10% of routine, a noble glucoside and an excellent antioxidant; it is more precisely a phytochemical compound than tones the walls of the capillaries reducing the risk of bleeding in people suffering from hypertension, edema, and arteriosclerosis improving microcirculation in people who present venous insufficiency o circulatory disorders, such as varicose veins.


According to an article published in 2010 by the magazine European Journal of Plant Science and Biotechnology, la buckwheat leaf flour would rich in proteins and minerals, such as calcium, magnesium, potassium, copper, manganese and iron.

Raw food yes, but not always

However you have to be careful and avoid consuming raw buckwheat leaves, as they also contain a natural organic substance called fagopirina, which is not so beneficial, as it could cause the so-called phagocytism.

The point is that this substance, if ingested in sufficient quantities, makes the skin of animals and humans photosenable, or rather, hypersensitive to sunlight.

There is talk of animals because the ripe leaves of buckwheat tend to come destined to feed some of them. For man it is above all about the shoots, which are more readily available and used.

Please note: therefore, especially for those who follow one raw food diet, when consuming raw buckwheat leaves or fresh sprouts: it should limit yourself to about 40 grams of buckwheat sprouts per day, no more, to avoid redness, burns and skin discomfort.

Use of buckwheat leaves

The seeds or grains, on the other hand, contain insignificant quantities of phagopyrin and are used both in the West and in the East, especially in Japan, where they are reduced to flour to make pasta room, the famous noodles served in soups or dry. Flour from the wheat or dried leaves is also commonly used for fare pane, pancakes (also known as crumpet, they are mainly eaten in Holland) or in India for i kuttu ki puri, dark Indian bread based on buckwheat.

Curiosity: dried buckwheat leaves and seeds are marketed in Europe under the "Fagorutin", in products such as tea, herbal teas, creams to improve circulation, strengthen capillaries and combat varicose veins.

Known in this regard is the buckwheat tea, tea made from buckwheat, widely consumed in Japan and Korea, easily available online.

Sprouts in the kitchen

add a comment of Buckwheat leaves: benefits, toxicity and use