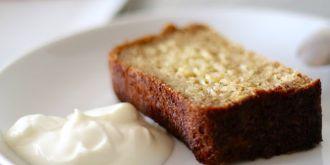 La Buckwheat cake it's a sweet typical of Valtellina, in the north of the country; it is a soft and leavened baked cake, filled with blueberry jam.

If you prepare with buckwheat flour which has a high content of fibers, and the starch composition allows it to lend itself optimally for sweet and savory preparations.

Let's see how it is prepared.

Preparation: separate the egg whites from the yolks and whisk (the egg whites) until stiff, adding half the sugar.

Separately melt the butter with the remaining sugar and the egg yolks, arriving at a smooth and lump-free cream: the sugar will have dissolved in the warm butter and the yolks will have perfectly mixed.

Add flour, baking powder, ground almonds and the content of a vanilla bean to this mixture. Vanilla yeast can be used instead of fresh vanilla.


Add the whipped egg whites a little at a time, incorporating them with a movement of the spatula from the bottom upwards, to prevent them from disassembling.

Line a mold with parchment paper or butter, pour the contents and bake for 50 minutes at 180 degrees.

Once cooked (do the test with a toothpick) it is removed from the oven and allowed to cool.

When it is at room temperature it will cut in half in the direction of the width: you can use a high bread knife or a nylon thread. With the help of a lid or a wide plate, open the cake and fill with the jam. Recompose the two halves, sprinkle with powdered sugar, and serve. You can add whipped cream or ice cream.

The original recipe involves the use of products of animal origin, but it is possible to obtain a tasty one vegan buckwheat cake, replacing eggs and butter with soy and derivatives from soy or rice.


Preparation: in a bowl combine all the dry ingredients and mix the flours with sugar, yeast and almonds. The yogurt is then added and blended. The mixture must have the soft consistency of the dough of plum cakes and margherita cakes. If it is too dry, you can add half a glass of rice or soy milk.

Pour the dough into a mold lined with parchment paper and cook in the oven at 180 degrees for 40 minutes. If the toothpick test says it is cooked, take it out of the oven and let it cool.

It is then cut in half widthwise, stuffed with blueberry jam, and closed. It is sprinkled with icing sugar and served with whipped cream, sour cream, ice cream, or without anything added.

Il buckwheat, despite the name, it does not belong to the grasses (cereals), a family of which the classic wheat belongs. However, it has the same appearance in grains and the flour can be used as an alternative to traditional flours. The absence of gluten also makes it suitable for preparations for celiacs and people with intolerances.

Buckwheat is a very ancient food, whose origin dates back to the far north east of Europe. It then spread from colder countries to central Europe.

In the country, some northern regions include the use of buckwheat among their traditional recipes, especially for winter preparations. Its properties are in fact warming and suitable for latitudes and cold seasons.

The nutritional properties include it among foods with a high biological value of vegetable proteins, fibers, amino acids, vitamins and minerals.

3 light recipes with buckwheat, even for vegans

> All cereals and their properties