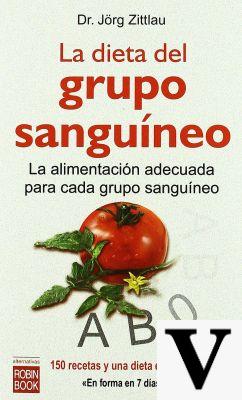 The description of the blood group diet is for informational purposes only; the author dissociates himself from any theory on the matter and limits himself to a comment contained in the last paragraph.

What is the blood type diet?

The blood type diet is a nutritional regimen with health and slimming purposes.

Conceived and promoted by the Italian American naturopath Dr. Peter D'Adamo, this diet is based on the theory that the blood group can heavily affect the relationship between food and metabolism.

Importance of evolution and blood group

The creator of this diet assumes that the differentiation of blood groups in humans took place during the course of Darwinian evolution.


In some way, the blood group should represent the genetic trace of an innate predisposition towards a certain type of diet, behavior and motor activity (including sport).

According to D'Adamo, certain foods contain particular proteins, called lectine, able to affect different blood groups (A, B, AB and 0) in different ways.

NB. Lectins are NOT lecithins (mixture of phospholipids contained mainly in soy and egg yolk with emulsifying properties), but proteins.

Each person, in relation to their blood group, is shown to be intolerant towards some lectins.
These peptides, once introduced into the body through food, would be able to attack red blood cells by "agglutinating them" (a term usually used for the specific reaction of agglutinin antibodies).
According to D'Adamo, taking these "enemy" lectins with the diet is equivalent to undergoing a small transfusion from a donor with a different blood type.


Such damage would explain the epidemic of food intolerances and disorders related to certain dietary choices.
This is how - from the pages of his first book "Eat Right 4 Your Type", published in 1997 - Dr. D'Adamo launches a real appeal to the whole world:

"stick to my blood type diet and digestive problems, fatigue and even some chronic ailments will be just a memory."

For the reasons we have described above, according to D'Adamo, to set up a healthy and effective diet it is necessary to take into account the blood group, to modify certain variables while respecting one's physiological inclinations.
Let's see how.

Group 0 is the progenitor of the various blood groups.
It is typical of hunters, characterized by an athletic physique and with a strong predisposition to foods of animal origin (meat).
These subjects would therefore benefit from the so-called high-protein and ketogenic diets, such as the Paleo diet.
On the other hand, dairy products, legumes, cereals and derivatives, such as bread, pasta, rice, beans, chickpeas, etc. are not recommended.
People with blood type zero would have a greater tendency to celiac disease.
Just like true primitive hunters, these people should regularly engage in heavy physical or sporting work activities characterized by the massive commitment of short-term strength and speed.

Group A is typical of farmers.
In the evolutionary history of man, this sustenance activity appeared late, but led to a radical change in the collective diet.
Carriers of blood group A benefit from a diet rich in plant foods, including vegetables, fruits, cereals, legumes and pseudocereals (other grains); on the other hand, the consumption of meat must be limited.

They too must avoid dairy products.
Assuming that the farmer's job "should be" less heavy than the hunter, it is advisable to associate the diet with a significant amount of "relaxing" or in any case not too demanding physical activity (golf, yoga, etc.).

Group B characterizes nomadic populations.
The main characteristics of these populations are the very strong immune system and a generally effective digestive system.
These people should be the only ones who can safely consume dairy products.
The only foods not recommended are those rich in preservatives and simple sugars.
Given the tendency to frequent movements, during which there is a lot of time to think, light physical activities with an important mental component, such as tennis and walking, would be more suitable.

finally, the AB group is described as "the enigmatic" and is at the top of the evolutionary ladder.
From a dietary and sports point of view, the enigmatic is halfway between group A and group B. He can therefore consume all foods in moderation, without exaggerating with dairy products.

The blood group diet is a food system founded on incorrect, incomplete or misrepresented principles.

Let's clarify: what are blood groups?

As explained in depth in the article "the blood group", for more than a century it has been known that there are four different blood groups, called respectively A, B, AB and 0.

If these combinations are NOT respected, the antibodies present in the plasma (agglutinins) attack the red blood cells of the transfused blood, neutralizing them (agglutination reaction) and forming small lumps that occlude the blood vessels causing very serious damage to the body.

Is the blood group diet a sound system?

The problems with the blood type diet begin when we go deeper into its scientific assumptions.

Does it make sense to demonize lectins?

According to the results of some independent, published and recognized studies, the various types of lectins are contained in the vast majority of foods at the same time, and would therefore not be able to selectively attack a single blood group.
Furthermore, the activity of these substances is very often zero and the fact that they can bind to cells does not automatically mean that they can cause agglutination.

can there be any consequences?

Importance of dairy products: without bothering illustrious scientists and incomprehensible theories to non-experts on the subject, to dismantle the alleged benefits of the blood type diet just think for a moment about the prohibition of consuming dairy products (with the exception of group B, which in your country represents only the '8-10% of the population).
As everyone knows, dairy products are rich in calcium, a mineral of which the diet is often poor and whose deficiency predisposes the subject to osteopenia and osteoporosis.


Too much meat protein: In addition to a low-dairy diet, individuals with blood type 0 are advised to take a lot of protein with their diet.
Since a diet too rich in these nutrients can promote the loss of calcium in the urine, following the advice of Dr. D'Adamo it is possible that in the long run the calcium deficiency becomes worse.
However, not all authors agree that the high-protein diet is a risk factor for osteoporosis, given its positive effect on intestinal calcium absorption and on the secretion of osteo-anabolic hormones, such as IGF-1.


Excess of fiber: the same can be said for subjects belonging to blood group A; the excessive consumption of fibers in fact hinders the absorption of calcium, already strongly compromised by the absence of dairy products in the diet (see diet and osteoporosis).

To remedy these dietary deficiencies, D'Adamo suggests and encourages the consumption of goat milk and derivatives for all.

Other consequences of the blood group diet

The excessive restriction of animal products suggested to group A could also cause deficiencies in iron, vitamin B12 and omega 3 fats.


The coup de grace comes from the statistical studies that blatantly deny the theories of this diet.
Since the subjects of group B can safely consume dairy products, it is expected that among the people belonging to this blood group the incidence of intolerances to milk is lower.

It is a pity that this hypothesis is not minimally confirmed by the statistical data currently available.


Let's just hope that in a few millennia the supporters of this diet will not end up recommending to a new blood type S (sedentary) born in the twenty-first century, a diet rich in fatty foods, alcohol and simple sugars, associated with the sedentary lifestyle typical of their ancestors who lived at the beginning of the third millennium.