Blaming Others: A Wrong Strategy 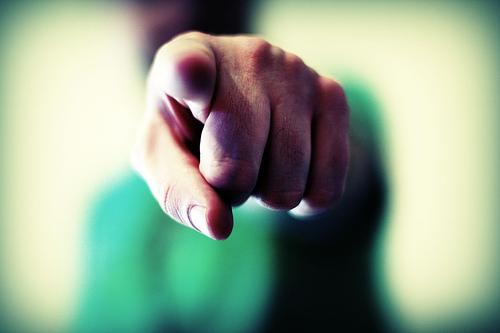 Once it was said, at least in Spanish, "to pass the dead to the other" (echar el muerto al otro). This phrase, which is still repeated in many parts of the world, comes from the Middle Ages and has a curious explanation: in the fiefs in which a person who died of unnatural causes was found, the inhabitants of the fiefdom were required to pay a tax to the lord of the fiefdom for having "killed" one of his workers. As you can imagine, when a dead individual was found he quickly agreed, loaded onto a mule or wagon to transport him to the nearest fiefdom. And so we saw ourselves exempt from paying the contribution. Although this story comes to us today as a funny tale, it is certain that the habit of unloading our responsibilities on others has remained over time. A friend told me: "If you have made a mistake and smile, it means that you have already identified who to place the blame on." We find it quite difficult to take on our share of responsibility, many times it is not even an unhealthy or conscious process but rather it happens through obscure and complicated tangles of automatic beliefs and forms of thought. What am I referring to? The fact that we grow by learning to blame others, we have an external "locus" of control that prevents us from assuming our responsibilities. And so we go with the most classic generalizing phrases that are heard everywhere in the world: "the economic crisis is the fault of the government and the powerful", "environmental pollution is the fault of the large multinationals" ... In short, our small role in every change social or natural tends to diminish until it disappears. However, have we ever sat down to reflect on what our small role in society really is? Let's take an example: I believe that a large part of us coincides with the idea that it is crazy to pay millions and millions of euros to a footballer when there are people living below the minimum poverty level even in rich countries. So ... what do we do? We complain about how unfair the world is; in short, we give the responsibility for this to the socio-economic system, but then later we go to the stadium to enjoy the football match, we buy the shirt of the champion we love, we subscribe to the satellite subscription to see all the matches of the favorite team; and so many millions of people (of which we are a part) help support an unjust world from our small daily decisions. Albert Einstein rightly said: "The world is not threatened by bad people, but by all those who allow evil". This way of seeing the world is based on the idea: "what can I do alone against everyone?" Without realizing that this is just a way of minimizing and eliminating all compromises. 1. We are so busy looking for who to blame for everything that we forget to look for the true causes of situations. 2. We assume the role of the victims that makes us feel safe, and that convinces us that it is not necessary to change anything in us, thus leading us towards the most absolute immobility. 3. We can't find an effective solution to things because we don't evaluate our real role in the situation and how we can affect it. 4. It deteriorates our interpersonal relationships as we take on a role that is uncomfortable and unfair to the people around us. 5. In the long run, this attitude produces feelings that lead to a lowering of defenses and a loss of self-esteem. Since we assume that everything around us is out of our control we tend to take a passive attitude. In short, unloading our responsibilities on others is a very convenient strategy but it can be converted into a dangerous double-edged sword. We should remember that making mistakes is human but taking our share of responsibility ennobles us.
Giving makes us happy, but we also have the right to receive ❯

add a comment of Blaming Others: A Wrong Strategy