The rise of Beyond Meat continues, known for its famous veggie burger with a taste very similar to that of beef. The company is now preparing to launch a novelty: the Beyond Pork which instead simulates the taste of pork. At the moment it will be destined exclusively for the Chinese market.

Beyond Pork is a ground vegetable designed to offer the taste and texture of pork but with approximately 50% less saturated and total fat than the animal variant.

The company is launching it in China where, to promote it in a big way, 5 Shanghai restaurants will offer it as part of some typical Chinese dishes until November 24th. 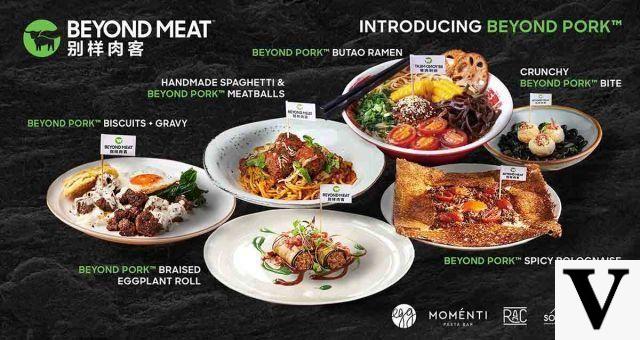 You may be wondering why China was chosen to launch this new plant product. The motivation is very simple, as stated in the Beyond Meat press release:

“Pork is the most popular meat in China and the country ranks among the highest pork consumption rates in the world, making it the ideal venue for the presentation of Beyond Pork, our first product designed specifically for the Chinese market ”.

Many typical dishes of China such as dumplings, mapo tofu, noodles and meatballs use pork inside them. This country is therefore in fact, in the eyes of the American company, the perfect place to show the potential of this new product.

We do not at all take for granted that Chinese consumers will actually appreciate this product but if it is really possible to replace pork, at least in part, the vegetable alternative will still prove to be an excellent choice for health but also for the environment. and animals (even if making homemade veggie burgers or eating legumes is always the best choice).

Beyond Pork, among other things, made with plant ingredients such as rice and soy, ensures a good source of protein (18,5 grams per 100 gram serving) and is produced without the use of GMOs, antibiotics or hormones.


It remains to be seen whether Chinese consumers will actually "leave" traditional pork for a packaged and most likely more expensive product.

add a comment of Beyon Meat launches “Beyond Pork” in China, the plant-based fake minced pork