In a film focused on sports, a training scene cannot be missing, from Rocky and Karate Kid to Cool Runnings and Kung Fu Panda. But which is the best of all? Let's find out together.

In addition to showing us a difficult and physically demanding workout in which a character achieves significant physical improvement, a cinematic training scene can be considered as successful if it has performed well at the box office, has been well received by critics and audiences alike. made headlines and, of course, was accompanied by a catchy soundtrack.

After applying these filters and bringing our team together, we started analyzing 35 of the most iconic training scenes from the most popular movies ever. 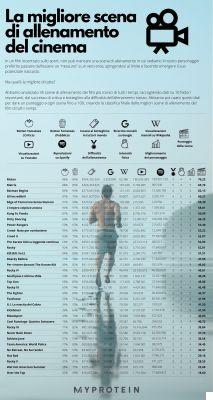 And the winner is…

Topping the chart is Disney's Mulan with an impressive 76,23 rating. In the scene, set to the melody "" I'll Make a Man Of You "", Mulan disguises himself as a man to train with the Chinese army, where he struggles to prove his worth to Captain Li Shang. During the scene, Mulan overcomes all obstacles that stand in her way, overcoming the other recruits and becoming one of our favorite Disney princesses ever!

In second place is the Matrix, with a score of 65,76. In this scene, Neo becomes an expert in various types of hand-to-hand combat thanks to training programs loaded directly into his brain (if only it were that easy in real life). At the end of the scene, he tests his new skills in an unforgettable hand-to-hand combat with Morpheus.

The last place in the standings goes to Over the Top, with a score of only 18,6. Sylvester Stallone plays Lincoln Hawk, a troubled truck driver who tries to become a wrestling champion while trying to reunite with his son. In the scene, Hawk can be seen using his truck as a training tool, doing push-ups from the front bumper and triceps in the cabin. 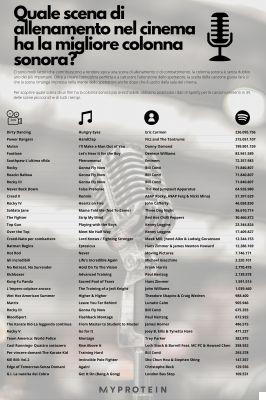 Which are the countries where the most sport is practiced?

And the winning song is ...

In first place goes to Dirty Dancing, with Eric Carmen's “Hungry Eyes”. With over 236 million plays on Spotify, it's impossible to hear this song and not imagine Baby learning to dance.

Second place goes to the Power Rangers with Fitz and The Tantrums' "HandClap", which has over 215 million plays on Spotify, followed by "I'll Make a Man Out of You" by Donny Osmond's Mulan with nearly 200 million plays. you listen.

In the last place we find GI The birth of the Cobra. In this scene, Duke and Ripcord test themselves in The Pit to the beat of London Bus Stop's “Get It On (Bang a Gong)”, which has only 109.531 plays on Spotify.

So why not watch one of your favorite movies as inspiration for your next workout? If you know where to look, the world of cinema offers a wealth of training resources, from epic soundtracks to load up your workouts to unthinkable exercises to surprise your body.

Based on 10 main criteria, we've compiled a list of 35 of the most iconic movie training scenes of all time. Using a ranking system, each scene was scored on each of 10 different criteria, which were then combined to give the final score up to 100. Each of the 10 criteria represents 10% of the final score.

Scores for Training Difficulty, Physical Intensity, and Character Improvement have been obtained up to 5, based on the following:

Box office receipts are presented in US dollars.

Audio Video Best cinema training scene
Does the pool make you lose weight? | All About Swimming and Aqua Fitness ❯