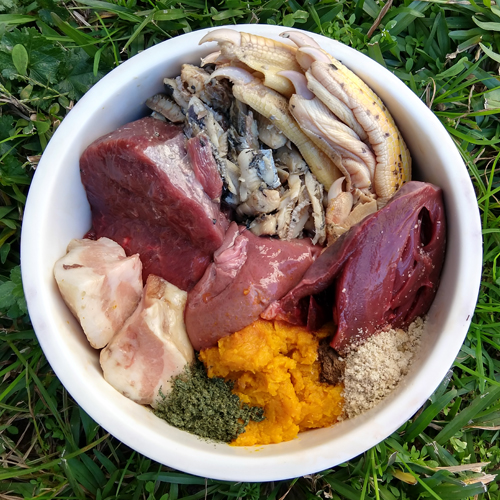 What is the BARF Diet?

The BARF diet (or barf) is a diet conceived by Dr. Ian Billinghurst for feeding some pets, including dogs, cats and ferrets (the latter two, obligate carnivores).

Barf is the acronym for Bones And Raw Food, invented by Debra Tripp.
The barf diet falls into the Raw Feeding category and is based on the selection of NON-cooked foods containing a "physiological" fifth quarter quantity (bones and offal).
Specifically, the barf diet consists of:

Bones, organs and skin are good for you

In truth, the fifth quarter should be further classified according to the purpose in:

Referring to veterinary nutrition, this distinction is conceptually wrong.
It is the animal itself that must choose what to eat or discard, regardless of the economic interests that gravitate around the food and veterinary industry.
Moreover, let's not forget that carnivores have evolved to digest any animal tissue (in the right proportions, of course).
Wild predatory mammals (such as felines and canids), especially small or medium-sized ones, do not leave leftovers or do so only marginally. The reasons are two:

In short, in the right quantities, the fifth quarter is considered an integral part of the diet of hunting mammals.

The above conditions apply ONLY to wild animals, while small domestic carnivores are often fed with large portions of meat obtained from animals much larger than normal (pork, beef, horse, tuna, ostrich, etc.).
With these raw materials, it is inevitable that the diet of the domestic carnivore involves a significant gap.
These are: horns, bones, nails, skin, feathers, fins, scales, etc. from large animals that are not the natural prey of small and medium domestic carnivorous mammals.
Often, certain components of the fifth quarter are processed in such a way as to increase their palatability (especially for chewing) and conservation; the most used methods are grinding and cooking.
From a chemical-nutritional point of view, these measures have the advantage of increasing the edible part of large prey, but at the same time have the disadvantage of sacrificing certain useful nutrients (amino acids, vitamins, etc.).

The point of view of the pro-BARF

Proponents of the method believe that the barf diet is a natural diet.
Compared to commercial food and even cooked meat, bones, raw meat and organs are nutritionally richer.
A "raw", that is natural, feeding program gives the animal several health benefits including:

Those who contest the barf system say it can increase the risk of:

In this sense, the contraindications could outweigh the advantages.
The claim that barf feeding may be inherently better because it is natural has been challenged especially by commercial promoters of pet food (they may have acted out of economic interest).

The number of veterinarians who support the adequacy of the barf diet is constantly increasing.
In 2014, the "Raw Feeding Veterinary Society" (RFVS) was founded in the UK, a body that organizes conferences or discussions on nutrition and other veterinary related topics.
The advantages offered by the barf diet are indisputable; no one who has experienced the method for an adequate time can argue otherwise.
Regarding the disadvantages, it must be remembered that:

Commercial food, especially for cats and ferrets, can be harmful.
According to the experience of many veterinarians, the diseases most frequently found in felines owe much of their onset to the consumption of dry food, rich in starchy flours (cereals, legumes and tubers) and not very hygienic.
The disorders in question are:

Let's not forget that obligate carnivores (such as cats and ferrets) are not predisposed to the correct digestion of plant foods and in particular of proteins.
Furthermore, the organism of these creatures autonomously regulates blood sugar without the need to introduce carbohydrates with foods which, being in excess, cause various diseases.
Most people believe that anyone can benefit from cooking food in terms of digestibility; indeed, although this exerts a denaturing effect (see the article "Cooking Proteins") on proteins, it seems to negatively modify the smallest structures, ultimately hindering digestion for some animals 1.
Furthermore, cooking inactivates the amino acid taurine which is essential for the cat. Feeding it only with cooked meat not added in taurine dramatically increases the risk of the animal becoming seriously ill2.

Audio Video Barf diet
Diet as a Cause of Hepatitis ❯