Barbell Curl | How is it done? Muscles Involved And Errors

It's one of the most popular memes about gym life: squat rack curls. And in real life, off the internet, it's one of the best ways to freak out those who want to seriously train in a commercial gym, and with every workout they have to work their way to the one rack ... to find it regularly occupied by those who have to do endless series of barbell curls, and decided to use it as a convenient support for the barbell.

But let's get serious again.

It is undeniable that the barbell curl, or barbell curl, is the parsley of the exercises to be performed in the weight room. On the other hand, it is the charm of big, pumped arms - guns, as the Americans call them.

And we all, sooner or later, fall into excess training of biceps and triceps!

At this point, in reality, the schools of thought are different: there are those who argue that the growth of the arms is stimulated sufficiently by the fundamentals - deadlifts, bench press, pull-ups… and those who insist on the need for targeted workouts.

A certain truth clearly does not exist: for sure, a healthy dose of barbell curl doesn't hurt! 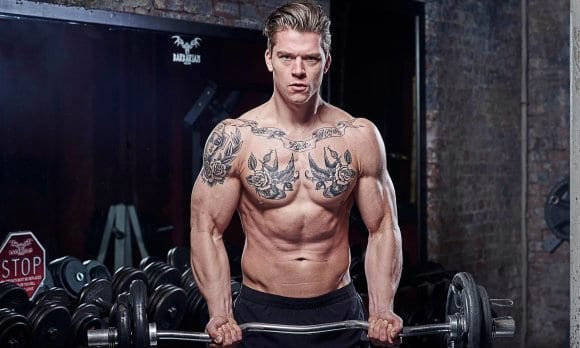 The barbell curl is an isolation exercise that affects the biceps. The brachial and brachioradialis muscles work in synergy with these, while the stabilization functions are delegated to anterior deltoids, scapulae elevators, trapezius and wrist flexors.

The barbell curl can be performed standing or sitting; we see in this article how to perform the standing one. 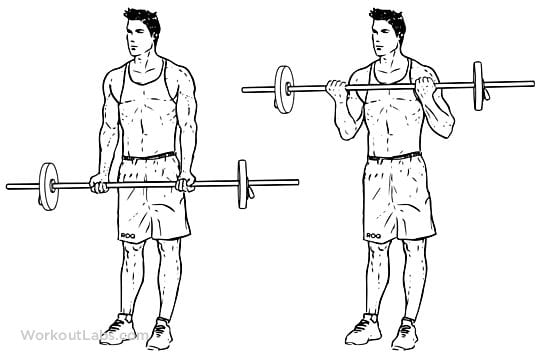 In the final position, the bar does not touch the body.

The key thing to keep in mind for perfect movement is that only the forearms need to move: using the rest of the body as a lever to facilitate the curl, swinging during the execution, is a mistake - the most common - which partially defeats the purpose of the exercise.

However, some help can be given at the end of the last long streaks, when we're working on hypertrophy, and we need to get to squeeze that last rep - it doesn't have to become a habit though!

Two further observations: the elbows must not even move forward, the weight must ALSO be checked during the descent phase.

To vary the attack on the muscles, the grip on the bar can be slightly widened, or tightened.

A warning is obviously to keep the core contracted, rigid, especially when climbing with loads.

The barbell curl puts our body at a mechanical disadvantage, as the weight is far from it. In fact, when you go up with loads, it is easy to start to feel pain at the junction of the biceps behind.

This prevents us from lifting heavy weights.


It is at this point that a slight movement of the hips - performed with control, without the tension in the biceps being released - allows us to overcome the locking point, which is usually found in the middle of the movement.

How you do it? Simply, the movement is started with the torso slightly tilted forward. We perform the barbell curl: when the barbell is in the middle of the movement, we give a firm strike of the hips to help us overcome the critical point and, only at this point, we tilt the body backwards slightly.

The core remains solid throughout the exercise.

When to do it?

In training the biceps, the barbell curl can be used as the first exercise of the workout, to go to work on strength: interesting loads, therefore, and repetitions in the range of eight or ten. A trick could possibly be to do these series in the form of the infamous "21": a total of twenty-one repetitions of the movement, broken down as follows:

Subsequently, you can work with "precision", going to exhaust the biceps to trigger the hypertrophy process. An idea? After the barbell curls, perform three or four sets of preacher curls, a few sets of dumbbell curls - the loads will be significantly less at this point - and finally close with a few light sets of dumbbell hammer curls.

Growth - and burning - will be assured!

add a comment of Barbell Curl | How is it done? Muscles Involved And Errors