Avoiding Trauma in the Gym: Shoulders 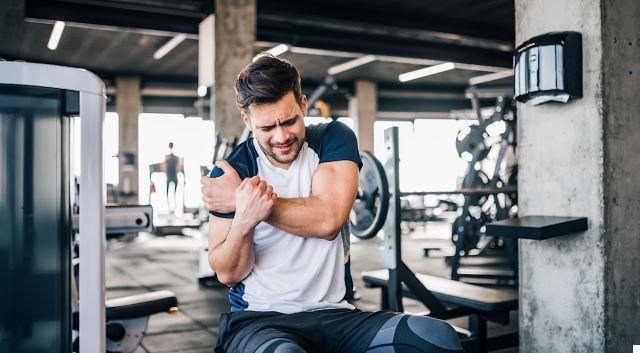 Lateral raises with dumbbells or cables

To lift them, you compensate for your lack of strength by reducing the lever arm by flexing your forearm by 90 ° and making real "kidney strokes". The negative part of the exercise is made to disappear and only the positive is done by slanting the back, with an accelerated and uncontrolled movement, clearly damaging to the spine. Paradoxically, it is curious to point out how girls in general, on the contrary, perform it at underestimated loads.

There are several and widespread errors of execution related to this movement. But in relation to the aspect we are dealing with, that is the trauma profile, here the risk of "getting hurt" occurs when performing without rest your forehead on a backrest. This results in constant tension on the stabilizing muscles of the trunk, with the risk of inflammation and soreness in the long term. Not only; if you do not keep your back straight, you risk rachid trauma already mentioned for deadlifts and good morning. It remains to underline the incorrect habit already mentioned for the lateral openings in orthostatic, of loading excessive weights, compensating with the reduction of the lever arm and helping with back blows.

Nothing in particular to report for Horizontal Extensions of the Homers to the Specific Machine.

Also called Sagittal Flexions of the Arms, they have traumatological potentialities that derive from the same execution errors of the lateral openings. In this case, then, we have an exacerbation of the problem as the arm raised anteriorly increases the torque, therefore the pressure on the spine with consequent ample effort of the lumbar and abdominal muscles for stabilization. As long as suitable loads are used, nothing frightening, but even in this case it is common to use excessive loads, carried up with "kidney blows" and without negative phase. The risk of trauma to the spine (herniations, protusions, inflammation, back pain, etc.) is therefore often even acute in nature.

Also known as Vertical Lifting with Narrow Grip Barbell or Pulls or Brings to the Chin. The same observations mentioned for lateral openings and lateral openings with a bent torso apply. It should also be noted that the movement close to the body involves the flexion of the hands. This should never be accentuated especially in the presence of heavy loads in order to avoid inflammation of the wrist tendons.

Also known as Pushes or Stretches Over the Head, in the slow back and slow forward variants, with dumbbells or barbell, it presents various risks of injury in, some obvious, others less known:

add a comment of Avoiding Trauma in the Gym: Shoulders