Athemoya, properties and benefits of the cherimoya hybrid

The category of exotic fruits known as annone includes not only well-identified species but also some hybrids.

One of them is called atemoya, a crasis between the terms ates (name by which the fruit is indicated in some Central American indigenous languages) and cherimoya (Spanish adaptation of two Quechua terms: chiri, meaning refreshing, and moya, meaning roundness).

It is a hybrid of two annonaceae, the Annona squamosa, commonly known as sugar apple or sweetsop and the Annona cherimola, said cherimoya or custard apple (cream apple).

It is one of the most widespread and loved annonaceous hybrids, found from China to Lebanon, from Spain to the Caribbean, from Israel to Malaysia, consumato is fresh because of its unmistakable creamy, sweet taste, with hints of nuts and pina colada, or a mix of coconut, vanilla and pineapple, but also in the form of ice cream, desserts and milkshakes.

The fruit was obtained in a botanical laboratory in Florida at the beginning of the last century. Basically the success of athemoya is due to the excellent relationship between pulp and seeds, as in cherimoya, and in the mix of sweet but not bland flavors.

Just like cherimoya, athemoya can grow smoothly too in many areas of the Mediterranean basin, see Israel, Lebanon, Spain, Tunisia, Sicily and Calabria. 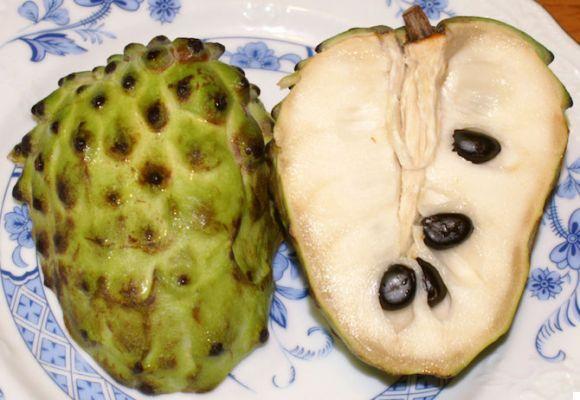 Properties and benefits of athemoya

We now list the properties of athemoya and the numerous health benefits that are obtained from its consumption.

Let's start with its very high level of vitamin C, the antioxidant par excellence among vitamins: we know with certainty that the level of antioxidants contained in the body is directly proportional to the level of general health of the body; therefore this fruit is considered excellent for health.

A good amount of is added to vitamin C dietary fiber, which is important to keep blood sugar levels under control; eating two atemoyas covers the daily requirement of dietary fiber. In the athemoya we also find a good level of vitamin B6, a friend of heart health and very important in the prevention of heart attacks.

To this is added the potassium contained in the fruit, which has the ability to lower blood pressure to normal levels, and the presence of niacin and stimulates the production of good cholesterol decreasing the bad one. In athemoya we also find good levels of copper and magnesium, respectively useful for keeping the thyroid and skeletal system healthy.


The good amount of fructose it is easily transformed into energy by the thiamina which is assumed by eating atemoya.

Other properties related to the consumption of the very good atemoya?


Do you know the exotic fruit "el paesena"?

add a comment of Athemoya, properties and benefits of the cherimoya hybrid