Assertiveness is one of the key characteristics of successful people: in this article you will find out what it is and how you can develop it to earn the respect of others.

“Nobody will give you freedom, justice or respect. You have to go get them. "

Try to imagine these three scenes:

Scene # 1: you are at the supermarket checkout, a person passes you by in a rude way, you start looking around with a surprised face, you snort, you look for the support of some other customer, but in the end you are good and kennel.

Scene # 2: Your boss always keeps giving you extra work 5 minutes before departure time or, even worse, on the weekend. You can't stand him, but he's your boss and you can't say "no" to him.

Scene # 3: when you are among your friends you would like to respond in kind to the teasing of the usual bitch, but all you can do is sketch an embarrassed smile, while inside you are exploding with anger for always being so weak .

If you have found yourself in at least one of these scenes, it is because you continually seek the approval of others and avoid any direct confrontation. In other words: you can't get yourself respected. This attitude is generally linked to a poor one assertiveness: if you don't have a clue what the heck I'm talking about, read on. In this post we will talk about assertive communication and the best tricks studied by psychology to learn not to get stuck on your head.

The assertiveness comes from the Latin verb “asserere” (yes, well André, is it the Las Ketchup song ?! “Aserejè, ja de, jè de jebe tu de jebere…”), which indicates the ability to affirm yourself. Being assertive therefore means communicating one's emotions and opinions clearly and effectively (no, I mean ... effectively) without having an aggressive attitude towards the interlocutor, for this reason we often also speak of assertive communication.

According to Sue Hadfield and Gill Hasson, authors of the book "How to be assertive in any situation“, In the study of psychology assertiveness is that behavior that allows an individual to defend their interests, affirm their point of view and express their thoughts, with ease, without anxiety and with respect for others. Not bad right? But to make you understand the concept of assertiveness even better, I want to tell you about a triangle: the Triangle of Assertiveness.

Do you remember when I told you about 4 archetypes of the adult human being (Warrior, Lover, Mage and King)? Each archetype was characterized by two "shadows", that is the two extremes of which the archetype represented the synthesis and the point of balance. Here, the same goes for theassertiveness. Being assertive means having found the middle ground between two opposite behaviors: passive behavior and aggressive behavior. Indeed, the assertive individual is at the apex of a triangle, what I call the Triangle of Assertiveness. I'll use the characters from one of my favorite movies to explain it to you: Back to the Future. 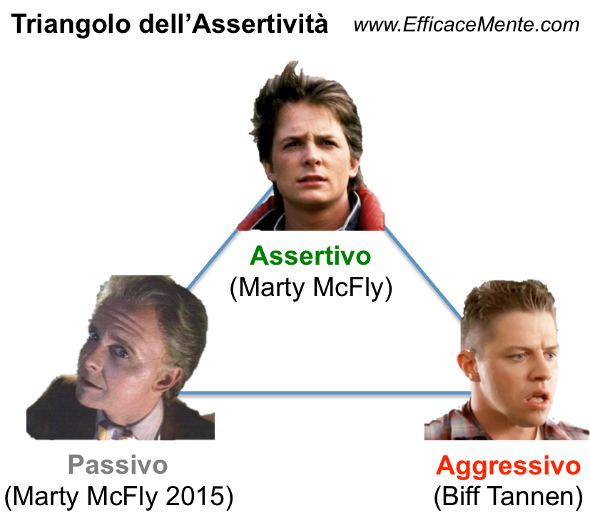 The individual passive, at the lower left, is represented by the old Marty McFly. Old Marty works for a corporation, has given up on his rock star dream, and after being fooled like a chicken by a colleague of his, he is fired on the spot by the classic "despot" boss. The vast majority of people often take the same attitude as old McFly. These people, not respecting themselves, fail to be respected by others: they never have their own position (and if they do, they keep it well hidden). They always follow the "flock" and are easily manipulated. They take life instead of giving it direction.


At the lower right we have the individual instead aggressive, represented by Biff Tannen. Biff is the classic neighborhood bully, always ready to impose himself on others. These individuals (highly insecure) try to be respected by others through aggression: they want to dominate any person, in any context. They tend to bully others. They want to assert their opinion at all costs, even if it is not relevant or completely wrong.

At the apex of the triangle we have the individual instead assertive, represented by the young Marty McFly. Marty is smart, confident and always ready to stand up for the ideas he believes in. The scene of the first film of the trilogy is epic, in which the young Marty performs on stage playing a Rock 'n' Roll piece on the guitar. Being assertive also means demonstrating your abilities to others, without fearing their judgment.

But what are the essential ingredients for developing your own assertiveness? How to avoid remaining passive, or even worse, turning into an inflated balloon?

How to be assertive: the 6 ingredients of assertiveness

If you want to be respected by others, you must first work on yourself and your assertiveness. Here are the 6 ingredients to be assertive:

I hope you enjoyed this article on assertiveness and assertive communication. Too often we do put our feet on our heads, and just as often, in order to react, we respond with aggression. We can be much better than this: we can be confident, strong in our ideas and determined to achieve our goals.

What if this week were more assertive it's less enslaved?

Self-control: 3 techniques to develop a will of steel ❯

Energy vampires: who they are and how to get rid of them

add a comment from Assertiveness: or how to learn to be respected