Anti Aging Diet - The Diet to Live Better and Longer

The aging of the human body is influenced by numerous variables, some of which strictly depend on our lifestyle.

For example, the factors on which it is possible to positively intervene to slow down aging include diet, the level of stress and physical activity, inner well-being (mood, self-esteem, professional gratifications, etc.), hours of night rest and refraining from cigarette smoking and drug use.

What Does Anti Aging Diet Mean? 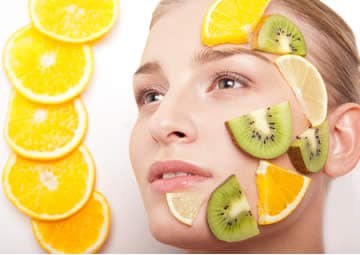 The so-called Anti Aging Diet (or Anti Aging) is a particular diet drawn up with the aim of improving the length and quality of life.

In a social context in which the length of life and the commitments related to it tend to increase more and more, putting at risk the sustainability of public models of health care, it is more important than ever. investing in healthy aging from an early age.

In other words, it is important to try to ensure a healthy and physiological aging, which allows you to live your old age in an active, serene and pathology-free way as much as possible.

The picture that is emerging for the future is that of health care that is ever more effective but less and less accessible for large sections of the population.

Given the future need to draw heavily on private spending on health care, one of the best investments to make is to immediately redefine the their diet and lifestyle, rethinking them in an anti-aging key.

What is the Anti Wrinkle Diet?

The so-called Anti Wrinkle Diet is a particular diet drawn up with the aim of slowing down the functional and aesthetic aging of the skin. Anti-aging diet and anti-wrinkle diet have many points in common, so much so that they can be considered globally as a single type of diet.

There are numerous and constantly increasing studies that try to investigate the anti-aging properties of certain foods and dietary models at different levels (experimental, clinical, epidemiological, etc.).

As logic suggests, rather than looking for "miraculous" foods or supplements to be included in one's diet, it would be preferable to redefine the entire diet as a whole.

The Vision of Umberto Veronesi

One of the most famous researchers to have focused on the anti-aging diet in your country was the doctor Umberto Veronesi. According to studies by the European Institute of Oncology in Milan (of which Veronesi was one of the founders), the anti-aging diet should be based primarily on calorie restriction.

The concept of calorie restriction means precisely to restrict, limit the intake of calories. On a practical level, it would be necessary to get up from the table with still a little appetite (indicatively with a belly full to 80% of what it would take to feel full).

In several experimental and epidemiological models it has been amply demonstrated that calorie restriction is one of the very few and true measures to extend life and reduce the risk of serious and fatal diseases such as cancer.

Be careful though, calorie restriction does not mean undernourishment or malnutrition; it is simply a matter of making different food choices, preferring foods with a low calorie density (see below).

In some cases, experts even go so far as to recommend semi-fasting, considered healthy if practiced occasionally after days of overeating (for example after Christmas binges or a ceremonial lunch). See also: Purifying Diet and Fasting Mimicking Diet.

Umberto Veronesi was one of the major supporters of the vegetarian eating style, considered important for both ethical and health issues. Beyond the ethical aspect, most studies and researchers agree that reducing animal food sources is beneficial for the body.

Below we list the most important dietary rules of the anti-aging diet, it being understood that this is general information, which at an individual level requires contextualization and a weighted application by a dietician or nutritionist.

Fruits and vegetables, by virtue of their high water content, are among the foods with a lower calorie density (that is, they bring fewer calories for the same weight consumed). Ideal for a calorie restriction regimen, they also contain important quantities of vitamins, minerals and antioxidants.

Pillar of the Mediterranean diet, cereals are a fairly controversial food. In fact, by virtue of the high energy density and low intake of micronutrients, a diet rich in cereals and refined derivatives predisposes to overweight, obesity and related diseases. It is therefore necessary to define some rules to best contextualize these foods in the antiaging diet:

These recommendations, like those seen for fruit and vegetables, are all the more valid the lower the daily calorie expenditure.

Therefore, more attention must be paid by people with a sedentary lifestyle, while sportsmen and workers engaged in heavy duties can give more space to refined cereals.

If from an epidemiological point of view we go to see the areas of the world where people live longer and which have inspired anti-aging food models (eg Cilento for the Mediterranean diet, Okinawa island for calorie restriction), we realize that it mostly deals with coastal regions and / or that live off local products.

In these rural areas the diet is based on vegetables and legumes from the garden, fruit from local trees, fish and possibly dairy products and wine; certainly the consumption of meat is always limited or very low.

Consequently, in the anti-aging diet it is important:

Vegetable oils are among the foods with the highest caloric density and it is therefore clear that their consumption should be done with extreme moderation. Furthermore, it would be important:

As for salt, the amount of sodium naturally contained in food makes it unnecessary (from a nutritional point of view) to add salt to dishes. Consequently, also considering the role of table salt in raising blood pressure values, it is important:

Wine, especially red wine, is considered by many to be an anti-aging food, as it would help reduce the risk of cardiovascular disease, diabetes mellitus and metabolic syndrome; this effect should be attributed both to alcohol itself and to some antioxidant substances (resveratrol, anthocyanins, etc.) contained above all in the skin of red grapes.

To obtain these alleged benefits, it is essential that wine consumption is moderate (no more than one glass a day for women, no more than two glasses for men); a higher consumption, in fact, is associated with an increased risk of cardiovascular and hepatic diseases.

A practical example of an anti-aging daily menu can be found in this infographic, written by one of the companies most used in the research and production of anti-aging food supplements with the X115® brand. 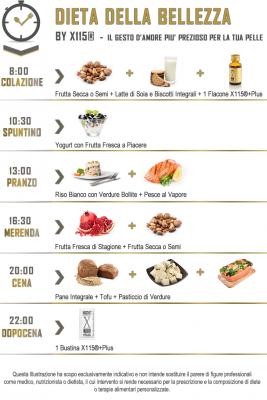 The so-called Antiaging supplements come in handy when the individual is unable to feed by understanding all the various elements that the body needs, for example when you often consume frugal meals for work reasons or when you practice a lot of physical activity or exposes you to other types of stress (seasonal changes, recovery from disease, excessive sun exposure, etc.).

The most widely used anti-aging supplements include: