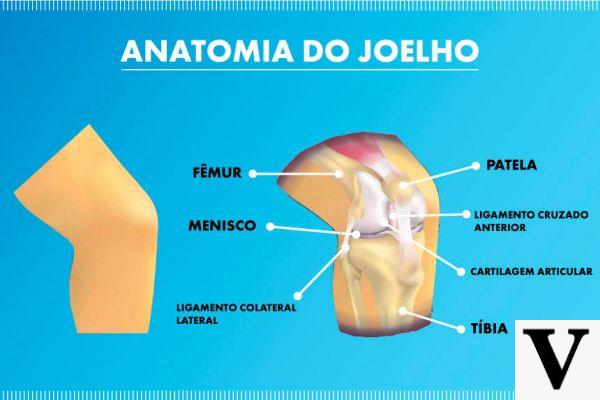 The knee is the largest joint in the body, this is made up of the femur above and the tibia below while the patella (or patella) is included in the joint itself (it is therefore a sesamoid bone).

With each step this joint is stressed by the entire weight of the body with compressive and shear forces.

When we run this stress increases exponentially and the same happens when we add weight to our body (for example when doing squats).

Fortunately, the knee is a very strong joint both in terms of the ligaments that hold it firm and the muscles that move it and give it stability.

Sooner or later it happens to everyone to feel bad in some area of ​​the knee, but we must not be alarmed and immediately think about serious problems. In most cases these are acute pains, which therefore do not last for a long time, due to excessive stress.

However, if the extent of the pain is disabling, this signal should not be underestimated and it is always good to contact qualified personnel.

When the pain is localized in the anterior area of ​​the knee, rather superficially, the causes may be the following:


In the third case, unfortunately, the remedies are few in terms of physical activity if you do not pay particular attention to the movements you do and choose conservative exercises.

Incorrect use of the lower limb system

The first cause listed is probably the most important. Paying attention to this, it is also possible to solve the excessive stress due to one's daily physical activity.

It is first necessary to understand how the system that moves the lower limb should work and by applying physiology to use the body in the way it should function.
As mentioned, the knee has very strong ligaments, but this does not mean that it is a good idea to subject them to constant stress. The knee is structured in such a way that it works in synchrony with the pelvis and ankle.

In particular, the pelvis must absorb shear forces while the ankle must accompany the movements of the knee allowing to keep the weight near the center of the foot.
When performing a squat, for example, the pelvis and knee must both be flexed at the same time.

This allows the pelvis to absorb most of the shear forces and at the same time function as a harmonious system.


To put this concept into practice, just imagine bringing your buttocks back while flexing your knees, you need to focus your attention on the hip and feel it flex.

Do not confuse the hip with the lumbar area, this must remain firm and firm. The idea is to feel the initial part of the thigh flexing in the pelvic area.

When it comes to activities like running and jumping, the principle is the same: the pelvis must always be involved in the movement as well.

When running it is necessary to focus on pushing the ground back and not sinking your feet into the ground, this not only reduces the stress on the knee but makes running more efficient because the force expressed has a greater horizontal component (running does not mean jumping towards up and forward).

When jumping, as in the squat, it is necessary to flex both knees and pelvis both when expressing the explosive force and when absorbing the fall.

The role of the ankle is quite simple: in the squat and in the jump the ankle must be flexed to maintain a correct weight discharge.

During the run a constant movement of dorsiflexion and plantiflexion should take place in order to absorb the impact with the ground and exploit the propulsive thrust of the triceps of the sura.

The myth that the knee should never go beyond the foot when performing squats is wrong.

The greater the horizontal trajectory of the knee the greater the shear forces but this is part of the correct physiology of the movement as long as the weight remains on the center of the foot.

If you pay attention to this detail, you end up doing half squats. Is the maximum stress on the knee recorded around 30 degrees and around 80? 90 degrees of flexion.

In addition, the half squats invite you to use greater loads which combined with an incorrect execution and a lack of use of the stretch reflex lead to greater stress.

The knee must be in line with the second half tarsus, the weight must remain on the center of the foot and the buttocks must absorb the weight along with the flexion of the knee.

add a comment of Anterior knee pain | Causes and Remedies