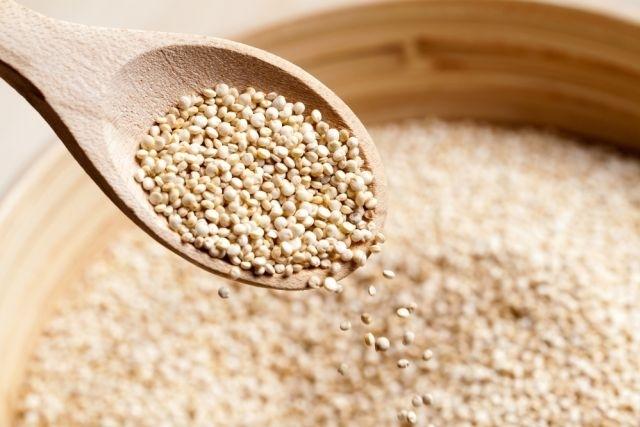 Native to pre-Columbian America, Incas and Aztecs, theamaranth is a plant which has traveled around the world and has come as far as the East (Indonesia and China) and India, where even today the leaves of the are included in the diet to overcome the iron deficiencies.

Amaranth, considered sacred plant and linked to friendship which, as the meaning of the name "never fades", is known for its beautiful amaranth red inflorescences and for the small edible grains; is part of the Amarantaceae family, but is commonly used as a cereal, often cooked together with Quinoa, because it more or less has it same time and cooking method, as well as provence.

Let's find out more about hers properties and how to cook the seeds of this pseudocereal.

Its grains are rich in protein and fiber, its taste is pleasant, slightly sweet, with hints, according to some, reminiscent of hazelnut.

It does not contain gluten and is therefore a valid alternative for those suffering from allergies or intolerances to conventional cereals (such as celiac disease).

L'amaranth it is particularly energizing; 100 grams provide about 370 calories.

Amaranth therefore has good amounts of amino acids, does not contain saturated fat and has a low glycemic index; moreover, being based on insoluble fibers that increase fecal mass by accelerating intestinal transit, amaranth helps fight constipation and constipation.

Amaranth in the diet for celiacs

Amaranth: how to use it and where to buy it

As seen, the young amaranth plants they can be boiled and consumed like spinach, while the seeds they can be used for various recipes, from salads to bread and baked goods.

La amaranth flour, it should be emphasized, it is a very rich flour but that rises badly, therefore for bread making it is used mixed with other flours (wheat, kamut or spelled flour).

Instead, it is used quietly as natural thickener for sauces or soups; also sprouts of amaranth they are great foods to put in salads and its seeds can also be used to make pops (amaranth) corn, they burst just like corn pops!


It is washed, rinsing it with fresh water several times, then it can be boiled either in a normal pot (one cup of amaranth and three cups of water) for about 30 minutes, or it can be steamed, using for example the basket placed in the pot. under pressure, for about 20 minutes.

It can serve as a cous cous, accompanied by seasonal vegetables, such as zucchini, broccoli, eggplant, cherry tomatoes, parsley, olives, various sauces and so on and so forth!

Amaranth can be bought in the most well-stocked supermarkets or organic shops.

The plant stopped being cultivated when the monks of the Spanish conquistadors considered it blasphemous, since, considered sacred by the local populations, it was worshiped and eaten by making gods puppets in the shape of a god, mixed with agave juice and human blood. The Spaniards, ignoring its qualities, replaced its cultivation with corn.

Amaranth and other gluten-free cereals

> All cereals and their properties

Audio Video Amaranth seeds, properties and uses
Is it possible to lose weight with Omega 3? ❯

add a comment of Amaranth seeds, properties and uses