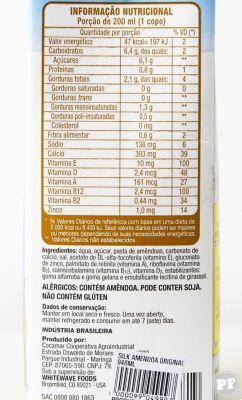 According to the new legislation, plant "milks" must be defined "vegetable drink". We specify it for correctness and adherence to official regulations. However, the standard does not concern the almond milk (but also cocoa butter and coconut milk) as indicated in Annex I, Decision 2010/791 / EU.

Let's see in detail i nutritional values ​​of almond milk.

In nature the almonds have different nutritional values which vary according to the soil, the age of the tree, the geographical area where the crops are located and others different conditions.

We add that every company producing almond milk uses certain and different ingredients (sugars in quantities ranging from 2 to even 16 grams, or salt or emulsifiers, thickeners ...) in addition to different quantities of almonds for production, varying between 2 and 11%.


We understand then how it is difficult to draw up a single table of nutritional values for the almond milk. We will see the main average values, relating to the products currently on the market.

Almond milk provides a fair amount of antioxidants in the form of tocopherol (vitamin E) and of fatty acids unsaturated (oleic and linoleic) "good".

Compared to cow's milk, almond milk provides a lower percentage of saturated fats but also of proteins (cow's milk contains about 3,3%), one higher share of carbohydrates in addition to being free of vitamin D., and therefore its use must take place in a balanced meal or snack (especially for adults) and balanced with an adequate dose of protein.

Almond milk: what is it?

Real almond milk is born as typical Sicilian homemade product - originally in monasteries - and usually consumed as a soft drink especially in summer. To date, the consumption of almond milk is now widespread throughout the peninsula, but especially in Sicily, Calabria, Puglia, Basilicata and Campania.

Almond milk is the result of squeezing ground almonds in water - after soaking - with the addition of sugar; it has thirst-quenching properties and its consumption increases in the summer seasonwhen served cold. AND ingredient of numerous preparations traditional, including: granita, coffee on ice and some desserts.

Read also Dried fruit, what it is good for >>