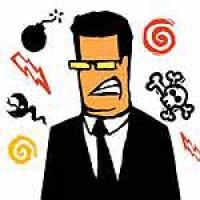 Probably the simplest definition ofaggression it is: āa hostile and threatening attitude that leads to confrontationā. But perhaps, it is not necessary to go too far into theoretical conceptualizations, since at least once we have all felt aggressive or have been the victim of someone who behaved aggressively. However, it should be remembered that aggression refers to a series of behavioral patterns that can manifest themselves with a very variable intensity and that include from facial gestures and mimicry to verbal expressions or even physical confrontation.

The majority of psychologists and sociologists see aggression as the expression of our most ancestral instincts of defense that lead us to try to conquer supremacy over the other. Some specialists claim that aggression cannot be eliminated but only mitigated. But I do not wish to enter into a philosophical discussion that would be of no use to those seeking ways to control or eliminate their own aggression. So let's start a short journey into this world. I believe that at the root of aggression lies anger, a particular feeling of disgust caused by negative attitudes on the part of others or by open opposition to us. In this case the person tries to fight not only against the situation that causes his anger but also against his own feeling. The paths can be very different, choosing aggression is one possibility among many, but the eminently aggressive person does not find any other solution path. At this point, one of the first steps in being able to control aggression depends on the person understanding that this is not the only way to deal with the world. It is necessary to meet an optimal midpoint between aggression and passivity, so that we can express our desires, feelings and opinions, assertively and without being imposed on them. It should be emphasized that behind aggression there is not only a pattern that leads to violence, but in many cases this is converted into a form to hide one's insecurity. The person does not have the necessary tools to get what he wants assertively, he feels more insecure, and this makes him aggressive in order to validate himself. Aggression arises from stress, frustration or the most diverse dissatisfactions. Without a doubt, letting yourself be carried away by emotions is much easier than controlling them. However, there is a particularly effective technique to control aggression when communicating: the so-called "recited mass", when we realize that the tone of the voice is increasing in volume, we should simply begin to lower it little by little, so our interlocutor, without even realizing it will do the same and the situation will not escape our control allowing us to have a productive exchange for both. Those who are particularly violent are advised to practice specific sports such as martial arts, which although it might seem strange, they allow you to channel all the energy and facilitate concentration, helping to maintain control over yourself. However, apart from all the techniques that may exist to control aggression, it is essential that the person is able to analyze himself in order to understand what are the causes that lead him to be aggressive and thus be able to work on this basis.
Helping those who don't want help causes emotional bleeding ❯