The juice or agave syrup is obtained from sap of the blue agave, belonging to the Agavaceae family, a fleshy and gelatinous plant from the Mexican desert.

The best environmental conditions for agave cultivation are found in the geographical area of Jalisco, near Tequila.

L'agave it is planted in extensive territories, where farmers fertilize and feed it for several years. After the first three years, the tops of the leaves are cut to accelerate the growth and thus make it mature in 8 - 11 years, in order to obtain the best agave juice.

Agave juice has advantages: first of all, it performs an action remineralizing, as it contains a large amount of calcium, magnesium, potassium and iron; despite being mostly composed of fructose, keeps a lower glycemic index than other sugars, as well as honey itself.

This means that the speed with which the agave syrup ingested increases the glucose level is the lowest among natural sweeteners, after stevia.

Commercially produced however, agave nectar is divided in percentage between fructose and glucose, with varying percentages depending on the producer. 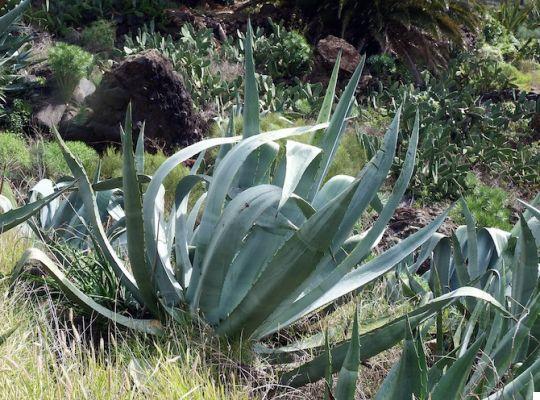 Discover also all the properties and contraindications of stevia

Use of agave syrup

Agave syrup is produced byplant starch, the so-called "heart" contained in the bulb roots similar to pineapple and is obtained by a process of generally natural extraction and concentration.

The juice is filtered from the solid parts, then it is heated in order to transform the carbohydrates (starch) into sugars (fructose) and finally it is concentrated to obtain a syrup, slightly more fluid than honey, but without flavor, able to sweeten 25% more white sugar.

Agave syrup for this can be used as sugar substitute in many recipes, as a natural sweetener to sweeten hot or cold drinks, as it has good solubility.

In the kitchen you can use as an ingredient in sweetsi, remembering, however, to use less than white sugar, as 75 g of agave juice sweeten as much as 100 g of refined sugar.

Agave syrup would therefore be an excellent natural alternative to sugar, however what you find on supermarket shelves is quite another thing than the nectar used by the natives of Central and South America and has some contraindications.


Commercially produced agave juice is made from the starch of the bulb root, therefore comes often chemically processed and treated, thus nullifying the nutritional value of this plant.

Precisely because of course it would have an intense and slightly spicy flavor, they are few producers of traditional unprocessed agave.

The question is precisely this: it is necessary to distinguish the agave syrup traditionally produced from the industrial and commercial one: the latter could in fact hide dangerous levels of fructose.

The lowest level of fructose found in agave nectar is 55%, while other varieties contain up to 97%. Now, the consumption of fructose would seem connected to a plus high risk of heart disease, cholesterol, liver damage and insulin resistance, which is not exactly ideal for diabetics.

Sugar: a danger not only for the "line"!

add a comment of Agave syrup: properties, use, contraindications