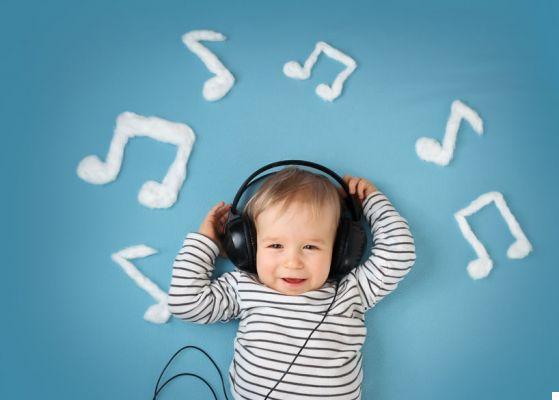 Why an article onperfect pitch? It's a long story, which begins thanks to Paul, a blog reader.

Paul is an actor, and discovered the MyHealthyGrowth Blog by reading the article on how to memorize a play script. Now, as he has to audition for a musical in a few months, Paul also finds himself having to learn to sing well.

And he asked me if there are memory techniques not so much for storing music, but rather for recognize and play musical notes with the voice.

What that whoever has theperfect pitch it does with great ease, but which in fact is precluded to most of us mere mortals.

I had investigated the world of music a couple of times in the past, and an article had come out, "The Mozart Effect", written thanks to the collaboration with the GetPersonalGrowth site.

But I had never seriously addressed the issue of memory and music techniques until Paul's request.

Furthermore, understanding the mechanism by which we are able to recognize and reproduce sounds that are very similar to each other seemed interesting to me also for another area very dear to the readers of MyHealthyGrowth: the study of foreign languages ​​and the improvement of the accent.

So, to answer Paul, a long article came out in which:

Absolute ear: what is it?

From a definition point of view, theperfect pitch it is the ability to identify the absolute pitch (ie the frequency of musical notes) without the aid of a reference sound, such as that of a tuning fork.

That is, I give you a note or a series of notes, and you, without any reference point, identify them.

This aspect of the lack of reference points distinguishes theabsolute pitch compared to relative.

In fact, in the relative I give you a point of reference, for example an "A" with the tuning fork, and then some notes.

But aside from the technical definition, what intrigues me about perfect pitch is the fact that it has been considered one for years almost "mythical" intellectual quality, belonged to very few musical geniuses. Including for example Mozart.

Furthermore, this ability to distinguish sounds is also related to the ability to learn foreign languages. And therefore it would be great to develop it, even for those who are not a singer.

Except that thePerfect pitch is often considered a non-acquirable talent, but genetically determined.

In the bestselling book Peak Anders Ericsson explains in depth a very important concept for anyone who wants to improve his performance, and in any field: the "deliberate practice", or focused exercise.

And it does so starting from music, from Mozart, and from a series of scientific research conducted on aspiring musicians.

The bottom line is that "deliberate practice" is something profoundly different from normal exercise.


In fact, in normal exercise you limit yourself to doing and doing the same things less and less. Kind of like when you study for your exams.

The exercise focused instead:

Think about it: surely there are some activities you have been doing for a very long time, for example studying, learning a language or playing a sport.

Maybe, for example, you go three times a week to play tennis with your friend, and you have now reached a plateau beyond which, even after a thousand games, your level does not improve more appreciably.


Or maybe you study English from elementary school, but you still have little understanding of original language films, and you have a bad accent.

This is very typical of unfocused exercise.

To improve you must instead break the routine with exercises of increasing difficulty, aimed at specific objectives, and under the guidance of continuous feedback.

Eventually even re-learning from scratch the "strokes" when their imperfect execution becomes a limit to the improvement of the technique.

According to Ericsson, therefore, who corroborates his position with a series of convincing scientific researches, it is this type of training that over time creates the great performances that we attribute to “genetic” talent.

And the secret would therefore lie in knowing how to organize and manage the learning / exercise schemes in the best way.

Of course then, and here we return for a moment to Mozart, earlier an individual if he dedicates ad an attività with deliberate practice, the more chances it will reach extraordinary levels of performance.

Partly because he has more years to accumulate hours of exercise, and partly because neuronal plasticity is greater at a very young age.

But now I'm not going to tell you all about the book which, believe me, is very convincing and useful.

Instead, let's think of Paul and his audition for the musical trying to figure out how to translate Ericsson's recommendations into practice.

To do this, and then to answer Paul about his request to develop his ear, absolute or relative, I will tell you an example from another book, of apparently very different topic.

Improving the accent: a problem with perfect pitch?

In the book “How to learn any language” the opera singer (oops, it's no coincidence!) And polyglot Gabriel Wyner talks, among other things, about the learning of language by children.

From a cognitive point of view, children are by no means superior to us in language learning (find out why by reading "how to learn a language even if you are no longer a child").

But they tear us apart when it comes to the accent. As if they did not say perfect pitch, but an ear much, much better than ours.

Let's try to understand why.

We all know that, often, the adult asians they hardly distinguish R from L, and it is even more difficult to pronounce them as distinct sounds.

Un Chinese or Japanese child on the contrary, it makes no effort to distinguish two words like Rima and Lima from each other.

That is, his brain is able to perfectly distinguish the R from the L, and loses this ability as the child grows.

You see, we think of the R and the L as two very very different letters. But that's not the case at all.

From a phonetic point of view, in fact, each consonant is part of a group of sounds that resemble each other; the R and L for example are part of the "liquid teeth", only one is ground and the other is not.

Now: Spanish grows up in an environment where he is continually subjected to "stimulus L" and "stimulus R", and therefore learns to distinguish them perfectly.

After some time, the brain of the Asian child, as it only listens to the intermediate stimulus "L / R" loses the ability to distinguish extremes “L” ed “R”.

The fact is that, because it doesn't need to do it, the brain stops doing it for reasons of economy!

And in the same way, for example, it is very difficult for a Spaniard to appreciate the different pronunciation of the group Th in "Think" and "That". While for an American they are at least as different as the L and R in Lima and Rima.

Maybe it sounds incredible to you, because to your ear the two "THs" sound absolutely alike, and there is no way you can hear and reproduce the difference. But that's right!

When a child learns a language, he acquires one selective deafness towards differences in pronunciation that do not exist in his. And it tends to assimilate to one of the sounds it already knows everything that has an intermediate sound.

And so he carries a bad accent even after studying a language for years and years.

Unless you use la deliberate practice.

Words like Lima and Rima are called "minimal pairs".

That is, they are pairs of words that differ only in one sound. Examples in English are "bad" and "bed", "pen" and "pan", "bin" and "bean". (Note that it is the difference in a sound, not the spelling, that defines the minimal pair. And so bin and bean are minimal pairs even though they differ by two letters.)

Obviously, minimal pairs are the hardest words for a foreigner to distinguish. And every foreigner, depending on his mother tongue, finds some difficult and others very simple.

As we have said, Asians have enormous difficulties in distinguishing the L and R sounds.

And so, the task of the subjects of the first group was just to stand in front of a computer with headphones and listen a few hundred times to the words Lock and Rock, repeated randomly.

Beyond a certain level of correct answers, they would have cashed in a small cash prize.

A Spaniard would certainly have made a clear path and collected the prize!

For the L / R speech seen above, however, the Japanese of the first group did very badly. Also showing that their ability to distinguish the minimal pairs "Lock" and "Rock" did not improve at all with practice.

The task of the Japanese subjects of the second group was similar but with one difference: every time they pressed the recognition key, the computer gave them immediate feedback, telling them if they had guessed right.

After just three 3-minute sessions, the second group had improved monstrously. As if their brain had reprogrammed itself, and was no longer "deaf" to the difference between R and L.

What made the difference for the people in the second group was deliberate practice.

This last point in particular, the feedback, had been instrumental.

Recognize and reproduce sounds, in Paul's case the musical notes, in other cases the nuances of the pronunciation of a language, it is certainly also a memory problem.

But to remember the difference between two things I must first of all be able to distinguish it.

This is why I believe that Paul's problem can be solved not with the usual memorization techniques, but with spaced repetition in association with the pattern feedback / correction.

What impresses me most is that "deafness" to the difference between L and R is a problem that many Asians do not solve not even after years and years of stay in a foreign country.

While in the experiment at Stanford University they were enough 3 sessions of 20 minutes.

Here, this is the difference between vague, non-specific "exercise", without well-defined goals and without precise feedback, and focused exercise.

The skill of the student and his coach, teacher, or whatever you want to call him, then consists in designing learning schemes that incorporate the characteristics of deliberate practice.

And if you don't have a teacher, or you can't afford it for as long as it takes, with the right tools you can still do a lot.

For example, if you study languages, you can use delayed repetition software and sound flashcards to create your own minimal pairs.

As for the music, I recommended to Paul an App that I found on the internet, and which is called Vocal Coach. It does, in its basic version, a very simple thing: it listens to you sing a note and tells you if you are singing it right.

Paul promised to let me know how it goes, so I hope to update this article someday.

Last but not least, at least for me: this post on perfect pitch and languages ​​I could not have written it without the exceptional information I found in the beautiful books by Gabriel Wyner and Anders Ericsson, to whom my thanks go.

add a comment of Absolute ear for music and foreign languages