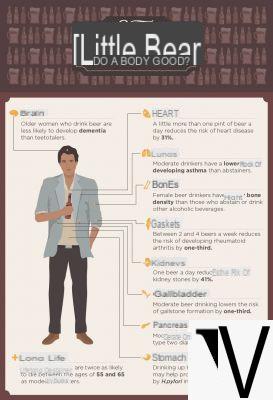 Beer it is appreciated by one in two of the country: to say it is Istat, also adding that in 2021 its consumption reached the top.

"Even if you only need 4 simple ingredients to prepare it, water, barley malt, hops and yeast, this drink can be considered a real food », explains the doctor Sara Gilardi, nutritionist biologist. "Obviously, since it contains alcohol, it is advisable to take it during a meal and within the limits indicated by the guidelines: 20 g per day for women (equivalent to 66 cl of a bottle) and 40 g for men (about a liter) ". At these doses it not only satisfies the palate, but ensures many advantages.

The formation of kidney stones depends on precipitation of substances, especially calcium oxalate, which aggregate in the urinary tract in the presence of insufficient or incorrect hydration.

A study published in the Clinical Journal of the American Society of Nephrology and conducted by doctors from Harvard University in Boston (USA) in collaboration with the Nephrology Unit of the Gemelli Polyclinic in Rome, reveals that the consumption of large quantities of carbonated and sugary drinks increases the chances of developing these painful pebbles by 33%. On the other hand, moderate consumption of beer limits its formation thanks to the action of ethanol (ie ethyl alcohol), which promotes diuresis.

"Furthermore, this drink is made up of about 85% water», Adds our expert,« and this undoubtedly increases the positive diuretic action ».

IT IS FRIEND OF THE HEART

Beer protects against cardiovascular diseases linked to blood clotting defects. «This thanks to the presence of vitamin B6, or folic acid, which regulates the levels of homocysteine, an amino acid which, if in excess, increases the risk of thrombosis », explains Dr. Gilardi.

In addition, it contains potassium, a trace element that helps lower blood pressure.

IT'S GOOD FOR THE BONES

A study published in the Journal of the Science of Food and Agriculture shows that a moderate consumption of beer can counteract osteoporosis.

Malt and especially hops are a source in an easily assimilable form of silicon (or orthosilicic acid), a substance that promotes the formation of collagen and it is important for the growth and development of connective tissue and bone. "It's about an extra help to strengthen the bones, obviously without forgetting to take calcium and vitamin D », comments the nutritionist.

Furthermore, according to this research, the Lighter colored beers are preferred because they have the highest silicon content, having undergone less stress during processing.

DELAYS THE AGING OF THE SKIN

The advantages of beer should also be listed an anti-aging effect in favor of the skin. «It is rich in antioxidants, such as i polyphenols of hops, vitamin E and those of group B (especially B1 and B6) and, even if not in excessive quantities, of all 8 essential amino acids. Nutrients that promote collagen production, giving turgidity and improving skin elasticity, preventing aging like that of nails and hair », reveals the expert.

In addition to being rich in water, beer contains a lot of potassium (90 mg in 33 cl), a trace element that helps rebalance the amount of sodium, thus counteracting fluid retention.

Thanks to vitamin B3 (or nicotinic acid), which for its relaxing effect helps sleep at night.

A study conducted at the University of Tampere (Finland) states that moderate consumption of beer appears to inhibit the appearance of so-called beta amyloid plaques in the brain, that is, the protein clusters characteristic of Alzheimer's disease.

«The protective effect would depend above all on the massive presence of antioxidants, in particular of xanthumol, a flavonoid in which hops are rich », explains Dr. Gilardi.

CONTRASTS THE SPREAD OF CANCER

According to a study conducted by the Pharmacy Department of the University of Pisa, the xanthumol ensured by hops would also be able to reduce tumor angiogenesis. In practice, it acts as a kind of "natural chemotherapy" inhibiting the mechanisms thanks to which cancer cells obtain oxygen and multiply in the body.

WHEN IT IS NOT RECOMMENDED

Like all alcohol, beer is not recommended during pregnancy and breastfeeding, in those with liver and gastrointestinal tract diseases and in those who suffer from allergies or intolerances to malt or hops.

"Furthermore, it is contraindicated in gout sufferers, a form of arthritis due to excessive production or poor elimination of uric acid, ”he adds Fulvio Colombo, rheumatologist at the Zucchi Clinical Institutes of Monza and Carate Brianza. «Beer is in fact rich in purines, precursors of uric acid».

Audio Video 8 good reasons to drink beer (in moderation)
Anxiety in menopause: Keep it at bay with foods rich in zinc ❯