7 ingredients of animal origin that are hidden in common products 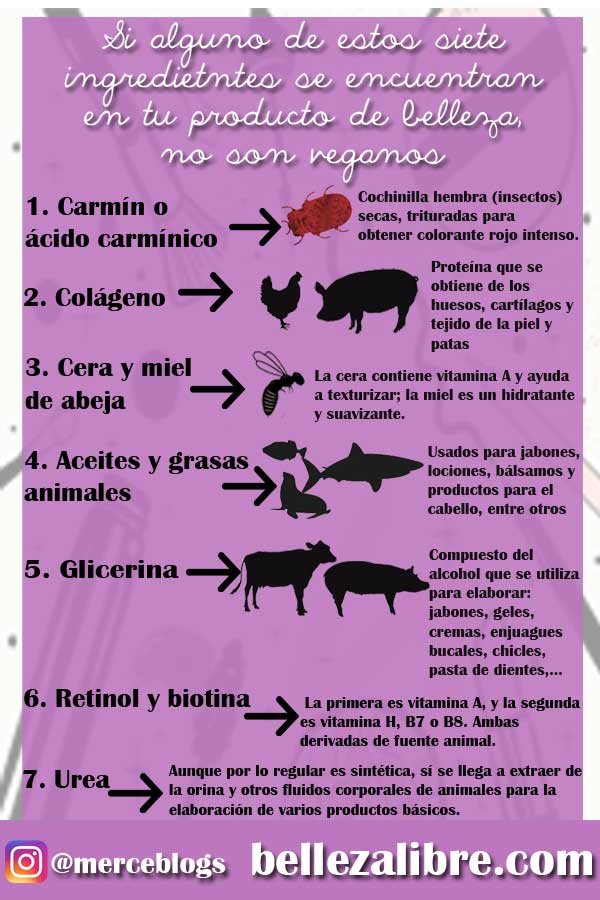 At first glance, for those who have chosen avegan nutrition, it might seem very simple to avoid in your diet products of animal origin. After all, meat, dairy, eggs, fish, etc need no introduction. But in reality it is much more difficult than it seems! In fact, as we have also seen in the 7 common foods where animal fats are hidden, often ingredients of animal origin can hide in precisely those foods and drinks that we would never suspect.

For example, did you know that the keratin present in your favorite shampoo is extracted from the hooves, feathers, horns and hair of the most beautiful living creatures? Or that the famous essence of musk, which appears to come from a plant, is actually extracted from the genitals of the small hornless North Asian deer?

And that's not all, often in some types of wines or even beers you can find: gelatine, egg whites and even ox blood!

Obviously all this to make the drink not only more pleasant to the taste but also to the eye.

But let's go in order and hold on tight because here comes the top of the 7 ingredients of animal origin that are hidden in commonly used products.

Carmine no, it is not a strange personal name, but a natural red dye extracted from the dried body of the insect carmine cochineal (Dactylopius coccus). This can be easily found in fruit drinks, sauces, candied cherries in jar, but it is also often used in cosmetics or even in theoil paints or in watercolors for coloring.

Usually when used as a food additive, carmine must be included in the ingredients found on the package label.

In reality, the breeding of these insects, in order to extract the dye, dates back to Mexico 400 years ago, and today, according to a report by the Wall Street Journal, the insects are raised on some farms in Peru, Mexico and the Canary Islands, where they feed on cacti. The colored powder is extracted and filtered by heated bodies and dried of the female insect. They want us 70.000 beetles to make a kilo of carmine good on the market.

But this dye is not only a danger for those who have decided to follow a vegan diet, rather it is a danger for the health of anyone else, as the resulting allergies can be very serious.

La casein is a protein found mainly in the fresh milk. It is often used as a binder in many foods such as bread, In the processed cereals, in the instant soups, in margarine, In the salad dressings in desserts and many cake preparations. But it can also be found in some drugs and to make things more difficult even in some products labeled "lactose-free", As this indication does not always mean" without milk ". But the difficulty is not only for those who have chosen a vegan diet, rather it is also for those who are allergic, as in the case of carmine, with casein. In fact, this product of animal origin must be expressly indicated on the label, and it is one of the good reasons to always read them very carefully.

For many of us, often, a daily duty is precisely that of take vitamins every morning: very important nutrients which, however, are often enclosed in a small "gel" cap, a small cap made of gelatin.

A generic definition of gelatin could be this: colorless, thickening agent which is often used to give body to sweets. This thickener which is usually used in industry pharmaceutica ed feed it is indeed of animal origin, and is prepared starting from thermal denaturation of collagen, isolated from the skin and bones of animals. But it can also be extracted from the skin of the fish.

We can find gelatine not only in candies or above Vitamins o Medicines in general but also very often in yogurt And in the cereals.

So be very careful! An excellent and absolutely natural substitute for gelatin is agar agar also known as "kanten".

READ also: Agar agar: the vegetable gelatin from algae. properties, uses and where to find it

If all of what has been said so far has not surprised you at all then maybe you will be ready for this: the gelatine it is obtained from the swim bladder of the sturgeon and is often used to lighten wines (especially the white ones) e beers. It would have come just to leave the fish their bladders and be more careful when buying a bottle of wine. Always prefer a good glass of organic wine. And for those who want to quench their thirst with a "beautiful blonde" here too the choice is not lacking, even did you not know that a Beer a day keeps diabetes and hypertension away?

One of the reasons why many vegetarians hesitate to take the path towards veganism is precisely the cheese. More specifically, they don't want to stop eating cheese, and the horrors are less noticeable with dairy products than with meat.

But perhaps we forget the rennet and its origin. In fact, the rennet of animal origin is extracted from calves o unweaned sheep and goats, and is used precisely for the production of cheese. To make matters worse, around 80 to 90% of cheeses on the market produced in the United States and England contain GMO-based, or genetically modified, rennet.

A by-product of cheese making, whey is the liquid part of the milk that separates from the curd during cheese making. Whey is often used as an additive in some products food and confectionery, And as food for animals. Whey, being an excellent source of protein, is the basis of protein drinks of athletes and all those who wish to build or repair their muscle tissues. It is also an important complement for those with limited mobility in the limbs, as it contributes to the prevention of muscle cell atrophy. Being a product of animal origin, it is indisputably out of a vegan diet, but being a superlative source of protein, many vegetarians, especially sportsmen, look for it as an ingredient.

But where is the serum hidden? Well yes, in canned cereals, in bread and finally in muesli.

And finally ... the morally indefensible and scientifically weak institution of animal testing is the frighteningly hidden ingredient in a wide range of products.

To put an end to this archaic practice, we must educate ourselves and work towards alternative methods of discovery and research to create new cruelty-free products therefore strictly not tested on animals.

How to recognize foods apparently vegan than actually'I'm not

the 7 common foods where animal fats are hidden

Additives: that "natural" wing of your city of vanilla extracted from the beaver glands