7 differences between a boss and a leader 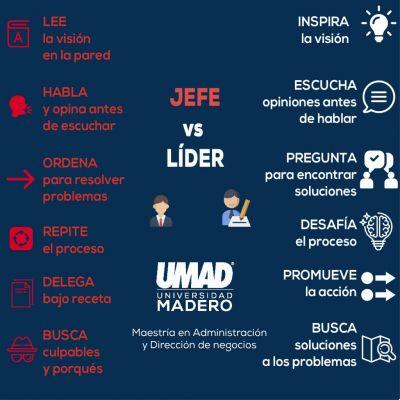 What are the differences between a boss and a leader? Some bosses may think they are the same, but the truth is that both employees and true leaders know exactly what the differences are. Let's find out together.

Some may use the terms "boss" and "leader" interchangeably, but this is not entirely accurate.

The truth is that some executives are just that: a boss. They have achieved a position in the managerial section of the corporate pyramid. They have a nice office and a reserved parking space. They make decisions that influence the direction of the business and often control how money is spent.

However, none of this makes them leaders.

The good news is that bosses can become leaders, and that should be a priority for those who want to run a business effectively.

By learning what the key differences are and applying them to the job, leaders can become the kind of leaders who recruit and retain top talent, while cultivating employee growth and increasing company results.

What are the characteristics that differentiate a boss from a leader? The following represent some fundamental distinctions between the two figures.

The 7 fundamental differences between boss and leader

Leaders motivate their employees, inspire them to follow their example. Bosses, on the other hand, tend to push employees rather than direct them. This type of manager tends to never make decisions, forcing employees to work without guidance or expectations, while their manager hides behind a wall of inertia.


Real leaders often come up with ideas and work alongside their employees. They clearly communicate goals to the team and their actions are directed towards achieving goals together. In this trait lies the difference between inspiring team members and losing their respect. When a team trusts a leader, morale is much higher and employees are much more motivated to contribute.

Good leaders spend time listening to their employees instead of talking over them. They understand the value of researching and integrating the opinions of others in decision making.

Leaders tend to dominate conversations. They expect employees to listen and carry out their orders, with little or no direction. This type of attitude is not a valid approach to building a team of people who want to be valued for their knowledge and skills.

I know that talking about mental manipulation is not very ethical, but if it is done for a good purpose (both for the company and for the employee) I don't see anything wrong with it: Mental Manipulation Psychological Tricks: 12 Infallible Techniques

The business world is not elementary school, although the idea of ​​a "teacher's bogeyman" is just as unattractive in the office as it is in the classroom. Bosses can sometimes pick a favorite employee or two, which can lead to unfair treatment, such as spending more time with certain employees than others, giving them more benefits and creating a close circle. This is generally not good for other employees and often reduces team productivity and morale.


Good leaders treat everyone equally, giving one person's ideas the same weight as everyone else on the team. Strong leaders don't let personal preferences get in the way of creating a dynamic environment.

4. Leaders roll up their sleeves

When a company launches a big project, true leaders go "into the trenches" with their teams. Leaders take the initiative, while bosses tend to stand back and "supervise" others who do the work.

Seeing that a leader is as committed to a project as the team can inspire others to do their best. Leaders like to be on the sidelines and interact only to give orders. This harms team motivation, collaboration, and creativity.

5. Leaders don't back down

There is a time and a place to report mistakes and advice to correct them. However, the vast majority of problems involving an employee can be handled with a dose of constructive criticism, not a harsh reprimand, both in private and in front of colleagues.

Leaders offer valuable advice in a private setting, while bosses tend to berate their employees even in public, which can leave them feeling worried, embarrassed, and despondent. Leaders can also impose some discipline, but their approach to doing so should be a learning experience for employees, to redirect their efforts away from what isn't working.

You may also be interested: These are the 7 secrets you must know to get rich


6. Leaders do not need to use fear

The old adage that a person would rather be feared than respected will no longer work in the modern office (if it ever did). Leaders understand that intimidating employees and trying to control them with fear will not work in any workplace. Fear leads to doubt, resentment and loss of productivity. Smart leaders inspire trust, enthusiasm, and empathy and show confidence in their employees to make decisions for themselves.

7. Leaders invest their time in employees

Some bosses, especially those who have chosen their favorites, tend to ignore most of their employees. This can give other workers the feeling of adrift. Leaders don't ignore. They invest time and effort in developing employees in their profession, teaching them new skills and helping them advance in their careers.

These represent some of the differences between a boss and a leader. They seem pretty simple, but simple doesn't always mean easy. True leaders are committed to evaluating their management style, understanding these fundamental differences, and making a concerted effort to put these good leadership characteristics into practice.

8 Cynical Mark Manson Quotes That Will Make You Grow Up ❯