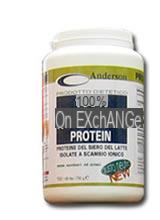 The proteins in question are obtained through a process known as ion exchange chromatography. This laboratory procedure allows to separate the various products based on their net charge, guaranteeing the possibility of obtaining a high quality product with a protein titration that exceeds 90%. The low share of fats and especially sugars, such as lactose, makes ion exchange proteins more suitable for those with lactose intolerances. The production method, however, significantly affects the protein composition of the product, reducing the amount of immunoglobulins and lactoferrin, in favor of the bettalactoglobulin component. In this regard, the average protein and amino acid composition is shown in the table.

Whey protein - word of Anglo-Saxon origin used to indicate whey proteins, which despite the similarity of the term, must be distinguished from milk proteins, consisting of 80% caseins and characterized by a rather different digestive and absorption spectrum, which it inevitably influences its biological functionality. Very important, in fact, was a recent study - which in addition to defining the timing of digestion and absorption - noted how caseins can significantly affect muscle function, saving fibers from degradation, and how whey proteins can significantly improve. the post work out anabolic phase, contributing more than double to muscle protein synthesis compared to caseins. Consequently, the very high biological value (comparable to that of the noble egg proteins), the high digestibility, the rich presence of branched chain amino acids and a very rapid absorption kinetics, make Whey the most used protein supplement in the field. sporty. This success, however, is not exclusively due to the aforementioned properties, but above all to their effect on body composition and in particular on muscle metabolism.
Several studies, and a lot of experience in the field, have shown how this product can guarantee a significant increase in muscle diameters and a marked increase in muscle mass; all this, however, only on condition that it is accompanied by a properly planned physical exercise. This "macroscopic" effect has been correlated to a series of events that take place at the cellular level, and which see the participation of complex signal transduction pathways and as many complex metabolic pathways. The activation of the transcription factors necessary to promote protein synthesis, a particularly evident insulin secretion about 40 minutes after intake, and the inhibition of proteolysis processes, represent only some of the biochemical pathways responsible for the muscle hypertrophy process, which goes hand in hand with the restoration of muscle glycogen stores.

To the hypertrophic effect, which seems to be supported not only by pure experimental evidence, but also by subtle biological mechanisms, there are others which, however, have not found the same unanimity of judgments. In fact, most of the subsequent effects, although documented by various studies, are generally denied by the most recent, as is the case for many other supplements. This great uncertainty of results, partly due to an intrinsic variability of the human species, prevents the use of these products also for other potential applications. More precisely, among the much discussed roles we find:

Recommended use by the company - 100% Ion Exchange Protein - Anderson

Mix 3 scoops = 30 g of product with 80 ml of mineral water or other liquid of your choice. Take one serving a day away from main meals.

How to use in sports 100% Ion Exchange Protein - Anderson

Although all companies generally suggest a dosage between 15 and 30 grams per day, it is absolutely not possible to define a priori a quota valid for everyone and moreover effective. In order for the integration with whey proteins to guarantee those benefits listed above, it is in fact necessary that it is set starting from the athlete's athletic, nutritional and physiological situation. In fact, the average protein requirement estimated for a healthy individual (equal to 1.2 gr / kg / day) can go up to double in endurance athletes, who inevitably need different supplementary protocols compared to amateur trainers. This need is essential not only in order to optimize supplementation, but above all to avoid the annoying side effects that can follow from an unbalanced diet in terms of proteins.
Taking these assumptions into account, it would be advisable:

Rereading the various articles in the literature, new supplementary protocols also appear, however little tested, which show a particular benefit in terms of increased lean mass, dividing the supplementary protein portion into several daily intakes of about 10 grams.

Proteins + antioxidants: the association of antioxidants seems to enhance the protective effect of proteins during intense physical activity.
Proteins + CHO: seems to be the most effective combination ever. In the pre-competition, suitably combined and choosing the most suitable source, carbohydrates can support performance and improve the energy properties of the muscle; in the post-work out, however, they can optimize the recovery and growth process.
Proteins + Creatine: always combined with carbohydrates, taken in the post work out, they seem to improve the increase in lean mass, even if not all studies agree.

Known are the long-term side effects of a diet too rich in protein or amino acids; damage to the kidney, dehydration induced by increased urinary secretion, liver or kidney suffering, lipidemic alterations and related associated pathologies, tissue acidosis and bone demineralization, are just some of the consequences of an unbalanced diet over time. Among the harmful effects deriving from a diet too rich in proteins, there is certainly also the increase in adipose tissue induced by the complex metabolic crossroads responsible for the energetic-functional coordination of the organism.

The product is contraindicated in cases of renal or hepatic pathology, cardiovascular disease and / or hypertension, allergies and autoimmune diseases, during pregnancy, during lactation, under 12 years and for adolescents not yet trained.
In case of prolonged use (over 6/8 weeks) the doctor's opinion is necessary.

This article, elaborated on the critical re-reading of scientific articles, university texts and common practice, is for information purposes only and therefore has no medical prescription value. It is therefore always required to consult your doctor, nutritionist or pharmacist before undertaking the use of any supplement. Learn more about the critical analysis of 100% Ion Exchange Protein - Anderson.